Jono Carroll has accused Scott Quigg of being mentally weak.

The Dubliner is a former IBF super-featherweight world title challenger and returns to the ring in a couple of months’ time.

Carroll, who was last in action back in August in Mexico, will take on Bury man Quigg in a dust-up at Manchester Arena, exclusively live on Sky Sports and DAZN.

The pair will meet on March 7, as part of a card promoted by Eddie Hearn and Matchroom Boxing, just three months after their first showdown was set to happen.

‘King Kong’ was meant to face Quigg back in December, at the Diriyah Arena in Diriyah, Saudi Arabia, as part of the supporting cast to Anthony Joshua’s shutout points victory over Andy Ruiz Jr. in which he regained the WBA Super, IBO, WBO and IBF heavyweight world titles. 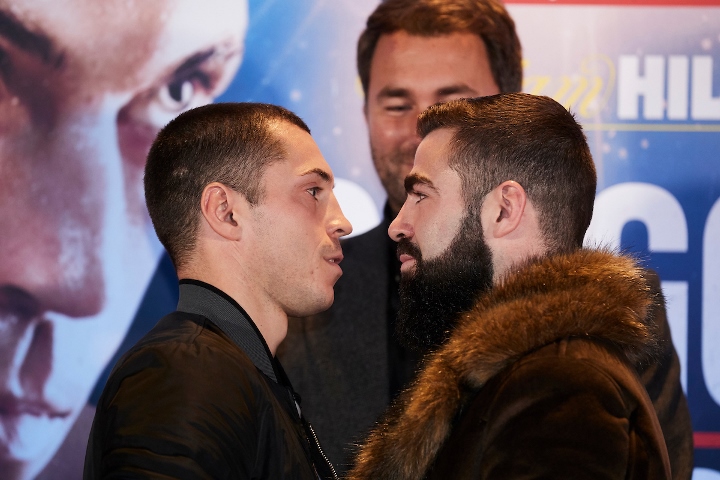 But Quigg, who has revealed that he will have Joe Gallagher in his corner once more, three years after leaving him to head Stateside with Freddie Roach, was forced to withdraw with an arm injury.

Now the clash is back on, Carroll has thrown in his two-pence about Quigg’s decision to return to Bolton, to the Gloves Community Centre, and team back up with two-time Boxing News trainer of the year Gallagher.

Quigg, whose last appearance n the ring came over a year ago, in October 2018, when he stopped Mario Briones at the TD Garden in Boston, Massachusetts. had three wins under Roach but was beaten by former WBO featherweight champion Oscar Valdez after coming in overweight for their March 2018 clash.

And Carroll is more than confident that he has what it takes to oust any ambitions Quigg harbours to once again reach the top level and insists that a win will propel him to another stratosphere.

“I’m finally topping a bill again," he continued. "When the fight in Saudi Arabia got cancelled, I thought Scott bottled it. This to me is a career shift.

“I’ve always wanted to top bills. I remember being there when Scott fought Kiko Martinez and I said to myself ‘I can’t wait to be there.’ I have no personal beef with anybody, but this is strictly business for me.

“The day after Christmas I went out to Philadelphia to train. I didn’t even get to see my baby play with her toys. That’s how much I am up for this fight. I jumped at this fight and I’m really looking forward to this fight. This could be over in a heartbeat.”

Carroll has been training with former rival Tevin Farmer ahead of the latter's defence of his aforementioned IBF super-featherweight strap against Joseph Diaz Jr. on March 30.

Farmer vs. Diaz Jr. is one part of a world title triple-header at the purpose-built Meridian at Island Gardens in Miami, Florida. Demetrius Andrade, fresh from inking a four-fight extension to his deal with Eddie Hearn and Matchroom Boxing, will make another defence of his WBO world middleweight title against mandatory challenger Luke Keeler and WBA and IBF world super-bantamweight champion Daniel Roman faces his mandatory challenger in the shape of Murodjon Akhmadaliev.

“I’m sitting down on my shots and starting to hurt with my shots. I’m looking to bring a different aspect completely to my game and push Scott back to win the fight.”

Quigg has been out of the ring long enough to make him that much more hungry. He will be more dangerous and that is not good news for the Irish lad. If it goes the distance win or lose Carroll…

I just don't see it. I mean anything is possible but unless Quigg is way off his game, he should take Carroll out. Carroll isn't "toppling" anybody with his 3 KOs. If he wins, it will be by a decision…