AHEAD of his WBA Super Middleweight title final eliminator John Ryder (26-4, 14 KOs) believes he has finally come of age.

The 30-year-old Londoner, promoted by Matchroom Boxing, will take one step closer to a world title shot should he defeat Russia’s Andrey Sirotkin (15-0, 4 KOs) on Saturday night at the Copper Box Arena in the English capital.

Ryder has rejuvenated himself spectacularly since losing a split decision to Rocky Fielding in Liverpool last year. Trained by Tony Sims ‘The Gorilla’ went on to dispatch of both Patrick Nielsen and Jamie Cox emphatically, in the space of seven months thereafter, with neither fight reaching the halfway point.

“Something in me has clicked,” Ryder told Boxing Scene over the phone nine days ago.

“It’s the right fights at the right time, I suppose. I’ve always said I’ll fight anyone. People had been saying ‘Oh you’re being used as an opponent for Nielsen’. I didn’t see it that way, I saw it as a 50-50 fight and then Cox came up and they said, ‘You’re being used again’. I did both fellas.” 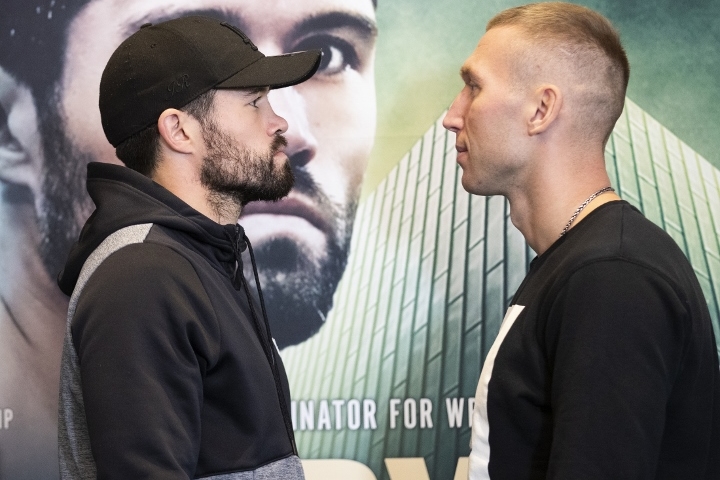 The inevitable question to follow up with was to discover what exactly has clicked? Ryder showed so much promise at Middleweight when he started out as a pro in 2010. He pushed Billy Joe Saunders all the way three years later in a British and Commonwealth title challenge, but then suffered surprising losses to Nick Blackwell and Jack Arnfield over a 16-month period between 2015 and 2016.

“I think it’s just comfort at the weight,” he said.

“For so long at middleweight I should have spent the last week sharpening the tools but was burning calories trying to get the weight down. Now, in the final few days of training, they’re spent sharpening up on the pads and just doing little short bursts and just keeping the engine running, rather than burning myself out. At Super Middleweight I just think I’m a lot better, I’m fresher, I’ve got more energy and I’m firing on all cylinders.”

Ryder’s best wins at 160lbs came against arguably Eamonn O’Kane, Sergey Khomitsky and Adam Etches. It’s been a long time coming but maturity and experience does wonders for a career. Ryder has remained patient, not pressed the panic button and tweaked a few things in the gym that he wouldn’t have entertained when he was a teenager learning his craft.

“I don’t have to train like a lunatic. I don’t train how I trained at 18. I train smart now and everything I do is with a purpose, and I know now that when Tony says you need to have a rest this weekend that it doesn’t mean have a burger on a Friday night and do a run on a Sunday to burn it off. It means stay sensible and rest, and that’s what I’ve done.”

The pieces are falling into place and now an unbeaten, awkward Russian who likes to hit, move and rack up the rounds without engaging, stands between Ryder and a world title opportunity that looked some distance off after losing to Fielding.

“This fight is as 50-50 as any of them because of his style,” Ryder remarked.

“It’s going to be a hard night’s work. On paper he’s not got the most glittering record, 15-0 with four knockouts, so it doesn’t suggest he’s a massive puncher, but he knows how to get through the rounds. It’ll be interesting.”

The win over Patrick Nielsen, his first inside the distance for over two years, catapulted Ryder near the top of the WBA rankings. He currently sits at number three in behind Vincent Feigenbutz and Fedor Chudinov but the landscape at the top has changed somewhat thanks to a couple of Liverpudlians.

“I know Canelo is this absolute superstar and what not, but it takes one punch in boxing and has Canelo been hit by someone as big as Rocky? I don’t know,” Ryder wondered.

“I’m sure the likes of (former opponent) [Alfredo] Angulo are big lumps. I don’t know. Rocky’s a long, rangy fighter. It’ll take him a bit of time to get used to the range I suppose with Rocky, but it’ll be interesting. It’s a good fight and fair play to Rocky for taking it.

For Callum Smith, it is a period of rest and enjoying life as a new world champion after the heavy handed 28-year-old took himself to the top of the tree last month stopping George Groves in the seventh round of their World Boxing Super Series final in Saudi Arabia.

“I did call Smith to win,” said Ryder as he discussed what went down in Jeddah.

“I thought it would be a points win or late stoppage. I honestly thought George’s shoulder wouldn’t hold up and I thought he’d end up being ahead on the scorecards but Callum coming into it late, maybe taking it late on points or late stoppage. If he hadn’t had the bad shoulder against Eubank Jr it could have been a different fight, but you never know, but hats off to Callum he did a great job.”

All eyes are on Sirotkin, but those will turn to Smith and the winner of Fielding and Canelo, should Ryder emerge victorious tomorrow night. He fully expects a world title opportunity, and the ever-improving southpaw has complete faith that he can deliver the goods and live up the promise he brought with him years ago. Credit, as Ryder says, goes to being happier in himself, his young family and discipline.

“I work really hard in the gym with Tony. I know what we say about we work smartly, we’ll try things out and we practice. I’ve realised now that in sparring, for example, it’s not about winning spars it’s about trying things out and learning things. When you’re young you don’t want to do that, you want to win every spar, just for the bragging rights. Now it doesn’t matter if you get pinged by a jab. If you’re practicing your slips and your rolls these things are going to happen. I do feel like I’ve come of age. I’m still developing. I learn all the time. I do believe in myself that I’ll be a world champion. I’m probably not in the easiest weight division to become a world champion but I am going to give it my all to become one.”

Why does Ryder have to fight everybody to get a world title shot, Hearns is doing what his Dad to Steve Roberts make him fight a **** load of world class fighters and have nothing to show at the end.…

It will make a change for Ryder to not be punching upward at 168lbs, hopefully he's not gotten too used to fighting much taller guys.