A grueling start with the two domestic rival trading punches at close range. Ryder had the edge as Cox was getting a little too wild. During the seconds round, Ryder landed a very hard shot to the temple, which sent Cox down on very delayed reaction. 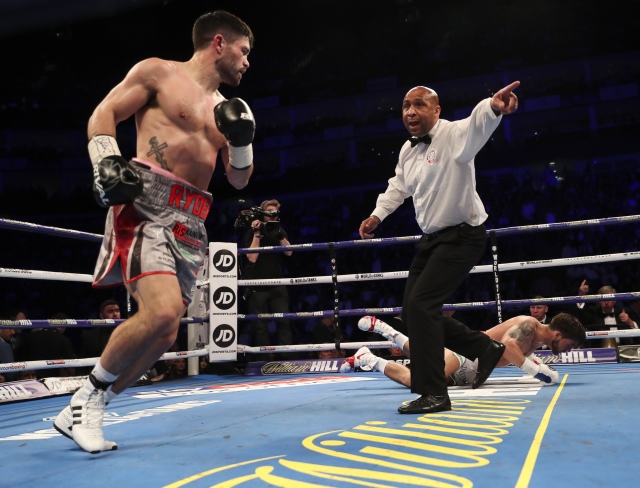 Cox has now lost two out of his last three fights, as two fights back he was knocked out in four rounds by George Groves in the World Boxing Super Series tournament.

Two fights ago, Ryder lost a close split decision to Rocky Fielding. But then he came back and secured a shocking knockout victory over Patrick Nielsen, who was the favorite, in five rounds last October.

Ryder is now hoping to get a world title shot and they appear to have instructed promoter Eddie Hearn to get them a crack at WBA "regular' champion Tyron Zeuge of Germany.

Also in action, Germany-born Alabaman super-welterweight Money Powell IV stopped Hungarian Mark Krammerstodter in the fourth and final round to move to 7-0. Powell IV had scored a knockdown from a body shot shortly before the finish.

If anyone had told me 4 or 5 years ago that Ryder would get stopped by Nick Blackwell but also stop Jamie Cox i'd have thought they were crazy. Strange how things turn out.

It was a weird one that. I think the ref was right though, Cox left it too late. Ryder is on a nice little run of late.

[QUOTE=NEETzsche;18740324]At least with Hearn they get exposed in timely fashion rather than having their records padded for years and years[/QUOTE] Rubbish. Butler became a WORLD CHAMPION with Warren and was on his way to another World title shot before he…

[QUOTE=NEETzsche;18740324]At least with Hearn they get exposed in timely fashion rather than having their records padded for years and years[/QUOTE] lol Hearn received them pre-padded, but in all honesty those two fighters have no commercial value so Hearn saw no…