John Ryder Knocks Out Andrey Sirotkin in Seventh Round

Sirotkin was in action back in March, when he won a twelve round decision over Ryan Fory, and last November he stopped former world champion Ricardo Mayorga in nine rounds.

Coming in, Ryder is riding a two knockout streak - with stoppages of Patrick Nielsen and Jamie Cox. 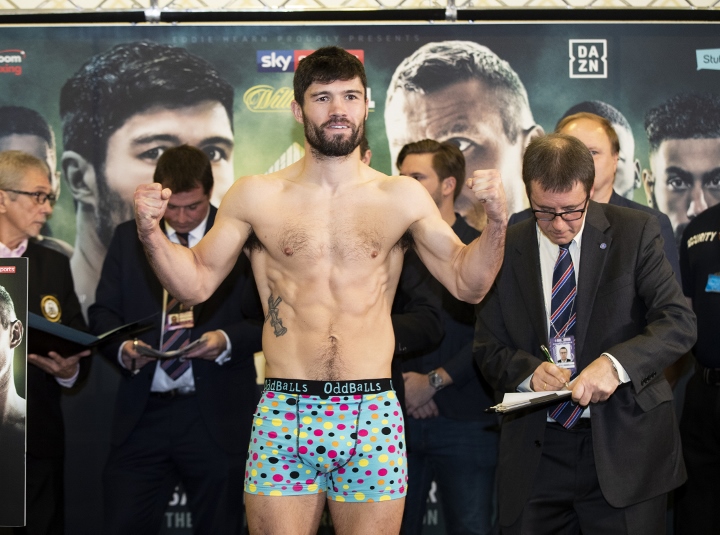 With the victory, Ryder becomes the mandatory challenger to the WBA 'super' champion Callum Smith.

Ryder was having trouble in the early going with the sharp boxing style of Sirotkin, who was using a solid jab and movement to create issues for the British man.

Ryder began to rally by the sixth, when he hurt Sirotkin with a body shot. But there may have been a clash of heads, as a bad cut opened up around the left eye of Ryder.

In the seventh, Ryder was busting up Sirotkin with heavy shots to the head and body. Sirotkin was not really throwing back and eventually got caught with a wicked right hook to the body. Sirotkin went down to his knees and failed to beat the full count of ten.

Jordan Gill (22-0) picks up the Commonwealth featherweight title with a seven round stoppage over Ryan Doyle (17-3-1).

Isaac Chamberlain (10-1) won a very close ten round decision over Luke Watkins (13-2) in a cruiserweight bout. The referee scored it 95-94.

Middleweight prospect Felix Cash (10-0) won a ten round unanimous decision over Stephen Danyo (14-2) for the WBC International silver title. The scores were 100-90 by all three judges.

I like Ryder, he's a bit of a throwback boxer an tough as old boots but he won't stand a chance against Smith. He'd be shipping more than 6 inches in height and probably close to a foot in reach,…

Ryder is a dog, he will give Callum a fight.

Good for him, he's on a nice little run.

I always thought Ryder would get to this level since the BJS fight. He’s a good fighter. Nice style. Sometimes he just couldnt get active enough in fights

A soft touch and stay busy fight for Callum Smith after he won the WBSS. I give a pass to Mundo for this fight, but I hope he make unification with the other champions.:ok: