Rising Scottish super-middleweight John Docherty extended his unbeaten record to nine fights as he stopped Anthony Fox in the seventh round of the show-opener on Eddie Hearn’s third Fight Camp show.

The highlight of Docherty’s amateur career was a bronze medal at the 2018 Commonwealth Games, having beaten the highly-touted Benjamin Whittaker in the quarter-final. The southpaw carries plenty of power, although he left himself a bit open at times.

“I’m over the moon,” Docherty said. “I started a bit slow and had my chin up in the air, but I got there in the end.

“I felt he tried a bit after the fourth round and the power went fromhis punches, but he was a lot stronger than I thought.” 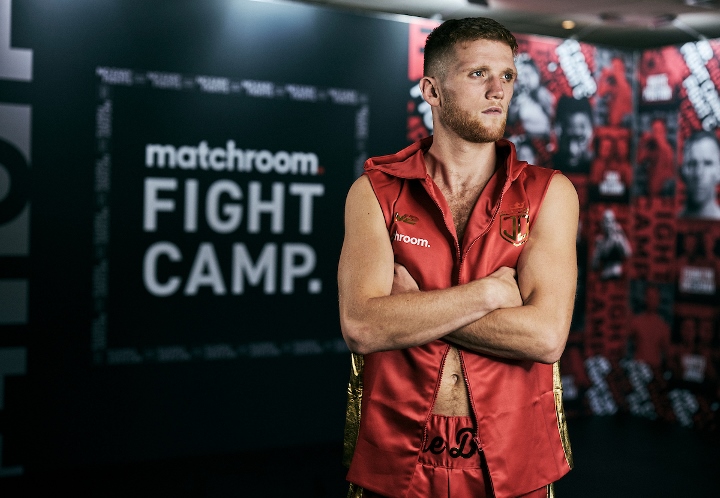 It was his seventh stoppage victory and while he said he would soon like to be challenging for the British title, it might be a bit early for that.

Docherty, 22, came forward from the opening bell, prodding away with a southpaw jab and loading up on his left hands, but Fox was happy to tuck up and look for opportunities on the counter-attack. In the main it was straightforward for the Scot although he looked open when he let his punches go.

Referee Howard Foster credited Docherty with a knockdown near the end of the third round, although Fox seemed to trip over his own feet. Fox did not protest, though, and things got a bit more one-sided in the fourth round as Docherty found his target with straight one-twos, prompting Fox to fire back in the fifth.

Docherty weathered the storm, though, and took back control behind his jab in the sixth round. In the dying seconds of the round, Docherty caught Fox with two hard left crosses that left Fox on unsteady legs, although there was no time for Docherty to follow up.

Early in the seventh round, another left saw Fox fall back into the ropes and he went to a knee as Docherty unloaded. Foster allowed him to continue, but there was to be no escape. Docherty kept the pressure on before Foster stepped in to stop the fight 62 seconds into the round.

He looked pretty impressive, this was the only fight I was hoping catch on this card and thankfully they stuck it on before Bayern-Barca kicks off.