Joet Gonzalez: Shakur Stevenson In My Way, I'll Knock Him Out!

From the moment he sought out to begin his 2019 campaign, Joet Gonzalez has demanded a title fight be in his near future.

A big step has been taken in making that dream a reality.

The unbeaten Los Angeles (Calif.)-based featherweight was over the moon upon hearing that the World Boxing Organization (WBO) called his name for a vacant title fight versus undefeated Shakur Stevenson.

“It’s about time I get my title shot,” Gonzalez (23-0, 14KOs) told BoxingScene.com upon hearing the news Tuesday afternoon. “I’ve accomplished more than many of my peers both in the amateurs and as a professional.” 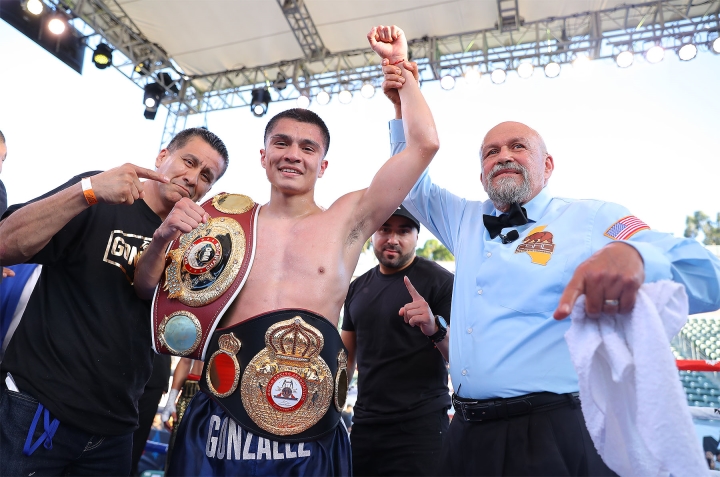 The opportunity arose when Oscar Valdez vacated in lieu of a mandatory defense versus Stevenson (12-0, 7KOs), though more so out of necessity as he can no longer make 126 pounds without risking his health.

With that came the ordered fight between two highest rated challengers in the WBO featherweight rankings.

It comes relatively early in the career of Stevenson, a 2016 Olympic Silver medalist from Newark, New Jersey. His rapid ascension from prospect to contender in just three short years, though, is in line with his intended career trajectory.

Gonzalez hasn’t been as blessed, as he’s spent the first six years of his career riding through regionally-based showcases on Golden Boy Promotions shows. His patience wore thin once the New Year came around, insisting in each of his last two starts that a title fight needed to be next.

As much was echoed by his team.

“We’ve been saying for years that Joet Gonzalez will be a world champion,” Frank Espinoza, Gonzalez’s longtime manager told BoxingScene.com. “Now that Oscar Valdez (whom Espinoza also manages) is going to take over the 130-pound division, his stablemate Joet Gonzalez will now do the same at 126 pounds by capturing the WBO Featherweight Title.”

The next step, of course, will be to line up that very fight. As the WBO has ordered the fight, it now requires Top Rank—Stevenson’s promoter—and Golden Boy Promotions to sit at the negotiating table and either work out a deal or allow the fight to head to a purse bid.

The two sides have 30 days to reach an agreement, which is not an issue at least as it relates to Gonzalez’s team.

“We are looking forward to doing the fight,” Eric Gomez, vice president of Golden Boy told BoxingScene.com. “I’ll be reaching out to Top Rank today.”

Gonzalez posted perhaps his best career win to date, a 6th round stoppage of Manuel Avila on a DAZN-streamed card in Carson, Calif.

“I showed in my last fight that nothing will stop me from winning a world title,” insists Gonzalez. “So, if Shakur Stevenson is in my way, then I’ll have to knock him out to finally win my first world title.”

Bob had the WBO order this fight bcuz Shakur is making waves about TR not giving him the spotlight. The juice come in bcuz Shakur was smashing Gonzalez sister. They've since broken up. Bob loves the drama here hoping Shakur…

[QUOTE=richardt;19969099]I would pay to see unbeatens vs unbeatens or vs once or twice beatens. If I never see another 15-6 fighter, my boxing entertainment world will be in a better state. No more hapless, helpless TBA's. And the worst part…

Stevenson is everything that the critics are not- a real fighter