Joel Diaz Jr. expects Regis Prograis to be the best opponent of his seven-year pro career.

The powerful prospect also anticipates putting the first loss on Prograis’ record Friday night in Verona, New York. The undefeated junior welterweights will meet in the main of a “ShoBox: The New Generation” tripleheader from Turning Stone Resort Casino (10:30 p.m. ET/PT), just the type of fight Diaz has wanted to establish himself as a 140-pound contender. 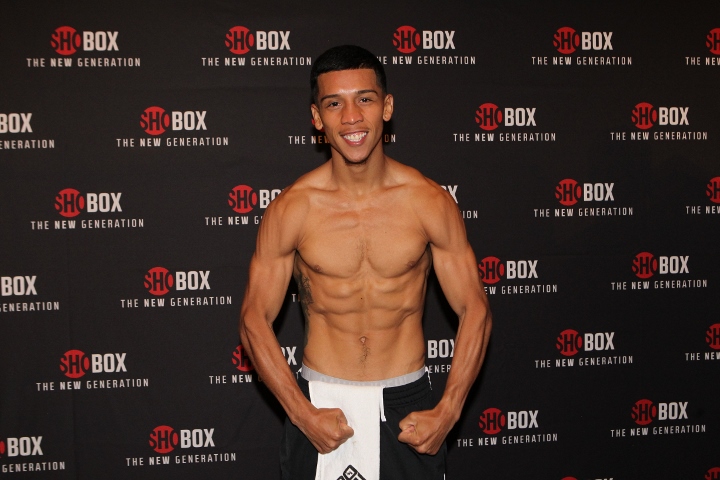 Prograis (19-0, 16 KOs), a southpaw from New Orleans, knocked out Colombia’s Wilfrido Buelvas (18-7, 12 KOs) in the first round of his last fight, February 11 in Biloxi, Mississippi. The NABF super lightweight champion feels he is ready to battle the best in the 140-pound division, but the hard-hitting Diaz (23-0, 19 KOs) believes he’ll be the stronger fighter in their 10-round bout.

“Sometimes you have to trust your abilities and have confidence in your work,” said Diaz, who’ll participate in his fourth straight fight as a full-fledged junior welterweight. “It doesn’t matter if I’m the smaller guy in the ring. I know what I can do and come June 9th, I’ll show the world who the real Joel Diaz is and what he’s about. And whoever wants some of Joel Diaz after this fight, let’s get it.”

He overcame a second-round knockdown and floored fellow undefeated prospect Guy Robb twice to win his sixth professional fight by seventh-round knockdown in January 2012. Diaz’s win against Robb (then 7-0) was part of a “ShoBox” telecast, as was his 10-round, unanimous-decision victory over Toronto’s Tyler Asselstine (then 14-1) in May 2014.

Three years later, he’ll encounter the toughest test since he turned pro in July 2010. Diaz is just thankful that co-promoters Lou DiBella and former light heavyweight champion Jean Pascal were able to get another undefeated fighter to face him.

“I’m 23-0 and after [Friday night] I’m gonna be 24-0,” Diaz said. “I’ve been training for this my whole life, for 15 years. It has finally come and we can’t let this opportunity pass. I should’ve had an opportunity like this in my seventh fight, [after] I fought Guy Robb, honestly. We were two undefeated guys. But that was back then. We’re here now and my focus is on winning this NABF title and opening new doors for Team Diaz.”

Jr better be careful here. His power is good when guys come to him, brawler style, but movement can blunt it. J jr's record shows, the survivors were movers and Vampire Barranza. Somebody will have to stick a stake in…

Is this Kid the son of trainer Joel Diaz? Kind of looks like the man but if it is why isn't he trained by his daddy?