Arum is also Smith’s co-promoter and has worked closely with DeGuardia, with whom he also co-promotes heavyweight contender Carlos Takam.

“We’ll be able to work this out,” DeGuardia told BoxingScene. “This is a formal procedure, just saying that the WBO has ordered the title fight. When they order a title fight you get a notice to begin negotiations and you have x–period of time to make a deal or it goes to purse bid. But I’m very confident we will have a deal in place. Bob and I are working together on Joe and I don’t anticipate any issues whatsoever. We will have a deal swiftly in place.” 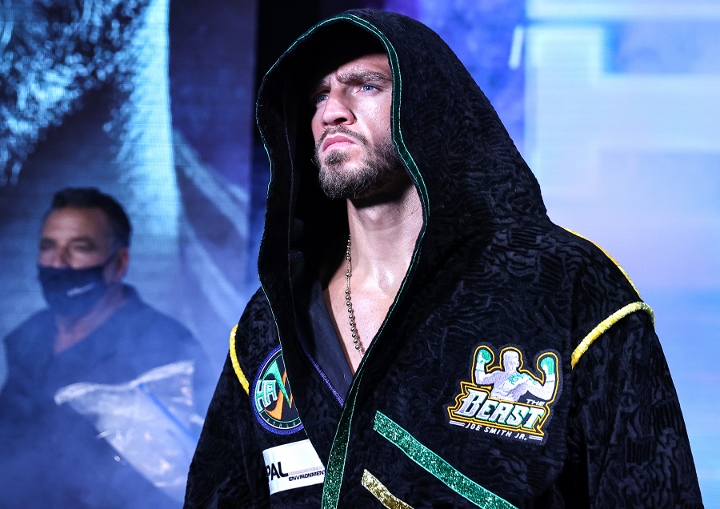 The fight would likely headline a Top Rank card on an ESPN platform in early 2021.

“I’m glad the WBO has come through and ordered the fight. It’s been a long time coming for Joe, for all of us,” DeGuardia said. “Joe is very excited to fight for a world title again.”

After Canelo Alvarez knocked out Sergey Kovalev in the 11th round to win the WBO 175-pound belt last Nov. 2, he vacated it soon after with the plan to move back down in weight.

The WBO eventually ordered a four-man box-off to fill the vacancy. In the first of the two semifinal bouts, Smith scored a ninth-round knockout of former world titleholder Eleider “Storm” Alvarez (25-2, 13 KOs) on Aug. 22 inside the bubble of the conference center at the MGM Grand in Las Vegas to earn his way into the world title bout.

The second semifinal was supposed to be between the 34-year-old Vlasov (45-3, 26 KOs) and Russian countryman Umar Salamov (25-1, 19 KOs), 26, who is based in Las Vegas. They were scheduled to fight on Oct. 23 in Russia but the fight was eventually postponed until Nov. 20 in Minsk, Belarus.

However, earlier this month the fight was postponed again after Salamov tested positive for Covid-19, and now the fight is off entirely with the WBO ordering Smith-Vlasov for the title in order to no longer delay filling the vacancy. It remains to be seen if the Smith-Vlasov winner will be ordered to make a mandatory defense against Salamov.

DeGuardia said the Smith side is just happy to get the title shot without having to wait what would likely been a few months before Vlasov-Salamov would have happened followed by several more months until Smith would face the winner.

“He’s such a hard-working guy. He puts so much into this and to have a year like we’ve had, he epitomizes the work ethic of the working person. I’m happy it’s paying off for him.”

Smith (26-3, 21 KOs), 31, sent Bernard Hopkins into retirement with an eighth-round upset knockout in December 2016, but then lost a 10-round unanimous decision to Sullivan Barrera in a fight in which Smith fought most of the bout with a badly broken jaw. After an 11-month layoff, Smith returned for a first-round knockout win over Melvin Russell in a tune-up fight and then got a world title opportunity against Dmitry Bivol in March 2019, but he lost a lopsided unanimous decision.

Since that defeat, however, Smith has looked sharp in two victories in a row. In the first fight of his co-promotional deal with Top Rank, he dropped and outpointed contender Jesse Hart in January and then knocked out Alvarez.

Vlasov has won three fights in a row since a one-fight move up to the cruiserweight division, where he lost a unanimous decision in an interim world title bout to Krzysztof Glowacki in November 2018 in Chicago in the quarterfinals of the World Boxing Super Series tournament.

Winner will have to fight Bivol or Beterbiev to prove somethiny anyway. Nobody really cares about WBO belt in higher divisions.

I like Joe Smith. He doesn't seem to be scared of anything & anybody and shuts his mouth and does his job. Hopefully, he can parlay this strap into some unification bouts.

So if a fighter doesn't have ties with Arum and TR he doesn't get a shot at the WBO title? How the WBO ignores it's own protocol is funny and frustrating. Let's see what they decide to create next.

i want Smith to win but Vlasov probobly outboxes him to a decision.

I like Vlasov, he's a quality boxer and very game. He was fortunate that he's advancing to the final because he can't get his opponent in the ring for one reason or the other. Meanwhile, JSJ had to go through…