Joe Smith: I Believe I'm A Little Tougher Than Beterbiev; I'll Get Him Out Of There

Joe Smith Jr. hopes his foreseeable fight against Artur Beterbiev happens just as much as many boxing fans.

The emerging light heavyweight contender considers a showdown with Beterbiev a can’t-miss action fight that’ll result in a knockout. The hard-hitting light heavyweights would have to win at least one more fight apiece prior to their bout becoming a more realistic possibility, but battling Beterbiev is in the back of Smith’s mind. 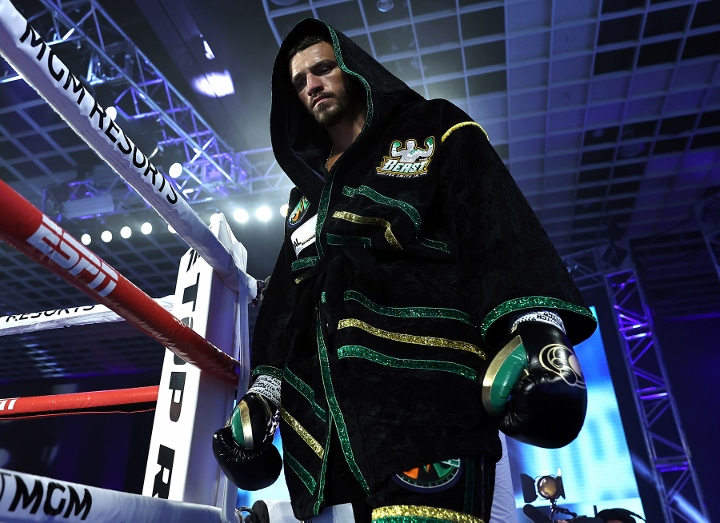 Russia’s Beterbiev (15-0, 15 KOs) is considered one of boxing’s most punishing punchers. The 35-year-old IBF/WBC champion is scheduled to defend his titles against Germany’s Adam Deines (19-1-1, 10 KOs) on a date in December in Ekaterinburg, Russia.

Long Island’s Smith (26-3, 21 KOs) secured his place in a fight for the vacant WBO light heavyweight title by knocking out former WBO champ Eleider Alvarez (25-2, 13 KOs) in the ninth round August 22 at MGM Grand Conference Center in Las Vegas.

“I think somebody’s gonna get knocked out,” Smith said of what would happen if he battles Beterbiev. “You know, he’s a huge puncher, so, you know, anything can happen.”

First, however, the 30-year-old Smith must face the winner of another WBO light heavyweight eliminator between Russian contenders Umar Salamov and Maksim Vlasov. Salamov (25-1, 19 KOs), the WBO’s number one contender, and the second-ranked Vlasov (45-3, 26 KOs). Their fight has been scheduled for the Beterbiev-Deines card, to fight for the right to meet Smith for the title Canelo Alvarez gave up after knocking out Sergey Kovalev on November 2 at MGM Grand Garden Arena in Las Vegas.

“I’m just waiting to hear the news,” Smith said regarding when he’ll face the Salamov-Vlasov winner. “I don’t know exactly what’s gonna happen. But I feel like they shoulda put the title on the line for this fight [versus Alvarez]. … You know, I fought the two best guys that were in the tournament [Alvarez and Jesse Hart], you know, and destroyed both of them. Now, we don’t know when these other two guys are gonna be able to fight, or if they’re even gonna be able to.”

Bivol is N.1. in division. he beats everybody there, including Canelo.

[QUOTE=alexguiness;20761767]I like this fight. Smith has come on recently and i think he could surprise some people.[/QUOTE] Whether Smith surprises anyone, or not, I like this fight!

[QUOTE=Southpawology;20760530]Not to say that beterbiev isnt a tough guy but Joe smith has fought twice with a broken jaw. Just sayin.[/QUOTE] No disagreement here; no disputing Smith is tough, and has proven that toughness. He just hadn't proven he's tougher…

I like this fight. Smith has come on recently and i think he could surprise some people.

how about alvarez vs either smith or beterbiev ?