Joe Joyce vs. Lenroy Thomas Looms, May 5 At O2 Arena

Joe Joyce will fight for his first title next month.

Boxing Scene understands that the Olympic silver medallist, who was defeated by Tony Yoka at the super-heavyweight Games final in Rio back in 2016, is in line to face Lenroy Thomas.

Joyce (3-0, 3 KOs) has long been touted as an addition to the undercard of Tony Bellew’s heavyweight grudge rematch showdown against David Haye. 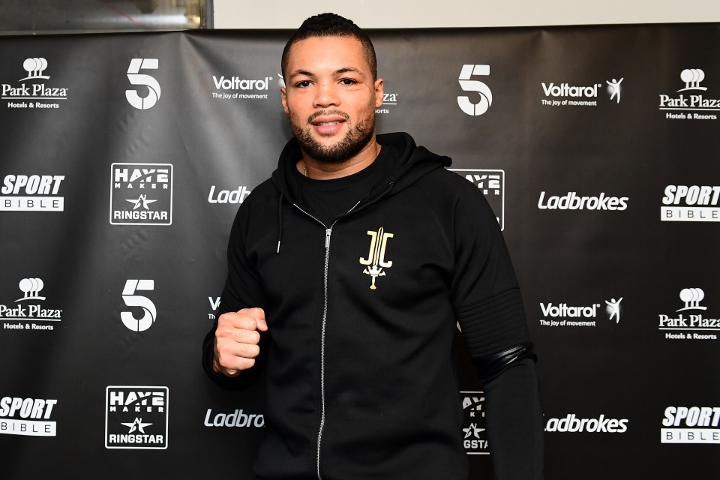 The Hayemaker Ringstar-promoted man, 32, is mentored by former undisputed cruiserweight king Haye and will box on the May 5 card topped by his promoter at the O2 Arena.

The bill will be screened exclusively live on Sky Sports Box Office from London and Jamaican-born Thomas will put his Commonwealth crown on the line.

It was thought that Joyce could face former British, Commonwealth and European champion Dereck Chisora, but that fight –– mentioned after Joyce won inside a round back in March –– failed to materialise.

Thomas, 33, has a record of 22-4-1 with 10 early and is well known to British fight fans, having travelled twice to Yorkshire in the past 11 months to take on David Allen.

Their last meeting, back in March at the FlyDSA Arena in Sheffield, ended in a technical decision after ‘The White Rhino’ suffered a cut in the opening round.

And he has decided to give ‘Juggernaut’ Joyce a crack at the crown in what will be only the Londoner’s fourth fight in the paid code after a stellar amateur career.

An official announcement regarding the fight will come via the relevant parties in due course.

Meanwhile, Boxing Scene understands that Jordan Gill, Bellew’s gym-mate, will also be added to the bill.

The main event is flanked by a whole host of names, with John Ryder clashing against Jamie Cox over 12 rounds in the super-middleweight division.

Martin J Ward defends his European super-featherweight title against WBA International champion James Tennyson in what is being described as a world title eliminator, while there is expected to be action for Willy Hutchinson.

****!! The White Rhino will never get the belt now unless Joyce vacates at a later date and Davey can fight someone of lesser opposition. Sad. Thomas will hang for a few rounds but get stopped between the 5th and…

[QUOTE=TheBigLug;18675575]I like Joyce a lot. He seems incredibly slow with his shots though. They seem to take ages to reach the target. I do wonder if a decent level boxer will see them coming all night and beat him to…

[QUOTE=Paddy Mashdown;18675751]Dave seems happy chilling at Babestation. He should quit boxing and take up p0rn. I'd watch it. :wank::wank:[/QUOTE] Is that where he gets the nickname from ....?

[QUOTE=Holler;18675528]No doubt money is the answer, it usually is. Could also be politics around the various promoters. Dubois and Gorman with Warren, Joyce with Haye who is working with Matchroom on the Haye Bellew fight and may have asked for…

[QUOTE=mlac;18675496]damn, gotta feel bad for the doncaster delahoya...he'll prolly never win the commonwealth now :([/QUOTE] Dave seems happy chilling at Babestation. He should quit boxing and take up p0rn. I'd watch it. :wank::wank: