A press conference was held at the BT Studios this afternoon for the star-studded undercard that backs up the top of the bill fight. 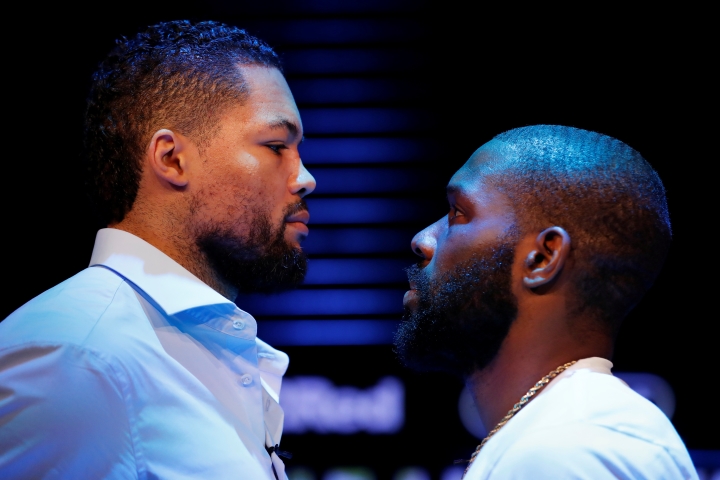 JOE JOYCE - "I’m good, ready, had a good camp and incorporated what Adam Booth has taught me and I’m really excited because this is a big fight against a credible opponent.

"This is the biggest fight of my professional career so far. Let’s see if he runs or goes toe-to-toe.

"It might be 1-0 to him with Adam, but now is redemption. Adam has taught me not to be a sitting target and get my head off line.

"I want to continue my 100 percent KO ratio and go 10-0 all by knockouts. I will be happy for it not to go the distance, but I am happy going 12 rounds. I just want to line them up and knock them over.

"The winner of Dubois v Gorman is an option and hopefully I will have time to get changed and come out to watch it after my fight. It is a 50-50 fight. Dubois is very strong and if he lands you’re in trouble. Gorman is a lot slicker."

Depending on which Jennings shows up, Joyce could have his hands full for at least some rounds. Bryant is definitely faster than him. And no Joe, you don't lose your weak defense in 1-2 training camps. Should be a good…

[QUOTE=shakedaddy;19891946]Dude, are you from Chicago and did you confuse Bryant "Bye Bye" Jennings with former Bears TE Keith Jennings? LOL[/QUOTE] I was wondering if this had morphed into a Keith Thurman/Manny Pacquiao comment?

[QUOTE=champion4ever;19891575]No, I think that Joyce will be too overpowering for Jennings. Moreover, Keith is on the downside of his career; A gatekeeper status. Therefore, Joyce should win this fight pretty convincingly.[/QUOTE] Dude, are you from Chicago and did you confuse…

I almost fell asleep watching a joy joyce 1-2 combination. Is this guy the slowest puncher in history?

No, I think that Joyce will be too overpowering for Jennings. Moreover, Keith is on the downside of his career; A gatekeeper status. Therefore, Joyce should win this fight pretty convincingly.