Joe Joyce: I Don't Care What Others Think - I'm Coming To Take Dubois Out!

They make heavyweights in Britain these days. For generations British fight fans got used to investing all their hopes in one big man, now they are spoilt for choice. In most eras, this weekend’s fight between Joe Joyce and Daniel Dubois would be to settle who was top dog in the country, now they are not even fighting for second place.

Such is an era that includes not only Tyson Fury and Anthony Joshua, but Dillian Whyte too. But had both Joyce and Dubois followed the original plan laid out for them, this fight would never have happened.

Both are products in their own way of the Great Britain Olympic programme, which has proved to be a remarkable production line of top-class heavyweights.

Back in 2008, Fury couldn’t get a look in after losing to David Price in early stages of the ABA Championships. The 2012 super-heavyweight slot went to Joshua, Joyce claimed the 2016 place in Rio. There was a slot for Dubois too, but he was earmarked for the Paris Olympics in 2024, after Frazer Clarke went to the Tokyo Games. For a young man in a hurry, Dubois, who sparred Joyce ahead of his trip to Rio, was not happy waiting that long.

So far it seems a sensible choice, as if things go his way this weekend - when the British, Commonwealth and European heavyweight titles will be on the line for the first time together since Lennox Lewis beat Derek Williams in 1992 – he could be boxing for a world title before the Tokyo Olympics happen.

“That’s exciting for me,” Dubois, 23, said. “That is a possibility that could happen. Beating Joyce could set me up for that. Even with the delay for this fight, we are not too far behind schedule. I’ve saved up my energy and I have grown as an individual in and out of the ring. I’ll be even more prepared than I would have.

“I haven’t wasted the last few months. I have been constantly working in the gym and trying to achieve perfection. I haven’t just been thinking about him, I have been working on myself, learning more about myself as a person and growing up into whatever the future holds for me.

“With the world shaken up like this, I’ve become tougher mentally and physically. You haven’t seen a lot of what I can do. It will be up to me when I am in the position to show it, then I will.

“I know I am a different animal now to how I was when I sparred him and I was still giving him trouble. I can’t wait to get him back. I was a kid doing my thing, enjoying the company and sparring with these top-rated fighters. Now it is time for me to become one and take over." 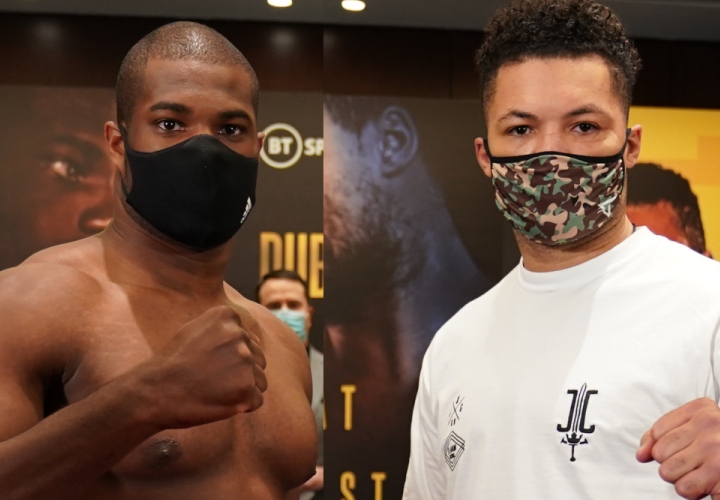 Dubois and Joyce would have every reason to be sick of the sight of each other. Over familiarity does that. On Saturday night they finally get to face each other in the ring, which for two men more comfortable with punching than talking, suits them just fine.

Plenty of boxers like to say they will do their talking in the ring, but seldom can that have been truer than of Dubois and Joyce. Neither is being impolite but talking in public doesn’t come naturally. Dubois can be shy, a product of an upbringing that saw him home-schooled and thus not mixing with many kids his own age. Joyce went to university, but sometimes talks as if he can’t fathom why people would be interested in him. Fortunately, no one is paying to see them talk.

They were first pitted against each other to announce their fight in February at the BT Tower in London in February when Dubois made a remark about Joyce’s mother, only Joyce was so disconnected from proceedings, he didn’t even notice.

Five months later, they stood either side of a Perspex screen in the grounds of the Maritime Museum in Greenwich and glared at each other.

Frank Warren, the promoter, did not need nasty words to sell the fight. The O2 Arena was close to being sold out when the pandemic intervened. Even then, few asked for a refund, hoping they would be able to be there when it was rearranged. Instead, they will have to watch on TV.

“For me as a promoter, to look at that box office with all that money in it and you can’t touch it, it’s a killer,” Warren said. “But we have all got to adapt. You are looking at losing £2-3 million on the gate. How are you going to make that up? You can’t. So everyone has to be realistic. But we made it work.

“I’m a fight fan, so what makes it exciting for me it that they are both tremendous fighters. It’s not a case that they don’t like each other, but there is a tremendous rivalry between them. When the Board announced the fight, no one would take a backward step. They both have tremendous self-belief. And whoever comes through is going to have a great 2021.”

At 35, Joyce has no time to waste. He looked on the wrong end of a raw deal when he face Tony Yoka in the Olympic final in Rio, which cost him that gold buzz when he turned professional. Still, he has been matched tough and earned what he has, even though the bookmakers favour Dubois.

“I never seem to be the favourite, I always seem to be the underdog,” Joyce said. “If I had been the gold medallist, would things have been different.

“This is the best fight out there that is going to catapult me in the right direction maybe straight towards a world title.”

[QUOTE=wileyhemi;20917236]Quote: Originally Posted by wileyhemi Exactly. Joe says he's coming to take him out but it's JJ they'll be taking out feet first My pleasure; I will. Ya gotta admit JJ is uncommon slow and has little snap though[/QUOTE] No…

Quote: Originally Posted by wileyhemi Exactly. Joe says he's coming to take him out but it's JJ they'll be taking out feet first [QUOTE=Boxingfanatic75;20914561]Thanks for playing...try again[/QUOTE] My pleasure; I will. Ya gotta admit JJ is uncommon slow and has…

[QUOTE=wileyhemi;20913644]Exactly. Joe says he's coming to take him out but it's JJ they'll be taking out feet first[/QUOTE] Thanks for playing...try again

[QUOTE=jikeccfc;20913228]joyce will be on blended food for a month wont get past the 5th will be knocked out cold:bottle::bottle::bottle:[/QUOTE] Appears Dubois will be slurping his food through a straw. Hope you even placed a bet on this one. Take that…