Joe Joyce: Dubois Thinks He Can Beat Me - I Know I Can Beat Him!

As of this writing, the Daniel Dubois-Joe Joyce show will still go ahead at the O2 Arena in London on April 11th. This is of course subject to change as the coronavirus has wreaked havoc throughout the world and shut down several professional sporting events and leagues.

There certainly is no love lost between the two fighters with both men looking to finish the fight inside of the distance. 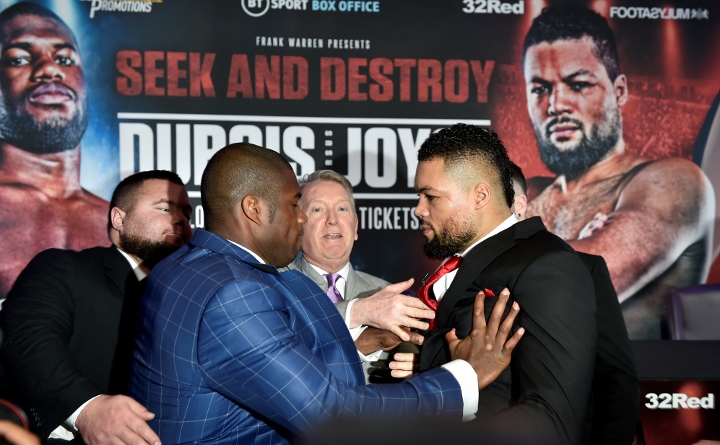 Joyce is holding his training camp in Las Vegas and while he respects Dubois' ability in the ring, he believes his skills and abilities are superior and will lead him to victory.

"He has said some questionable things. We both feel we are going to knock each other out so it is going to be an explosive, exciting fight. He thinks he can beat me and I know I can beat him. I just want to make sure I tick all the boxes in training camp and make sure I give myself the best possible chance of beating Dubois because I respect his power. He is a rising star in the division. He is a strong, powerful puncher so I have to be prepared. I am looking forward to it," Joyce told BoxingScene.com.

The 34-year-old reunited with former trainer Ismael Salas for this fight after working with Adam Booth in his recent fights.  Joyce believes that Salas will give him the best chance to win in what undoubtedly is the biggest fight of his career.

"Yes, I had to make sure everything is 100% and that I go in there with a great game plan and manage to do everything I need to do to knock him out," Joyce explained.

The all British showdown will headline a BT Box Office Sports pay-per-view in the United Kingdom and will likely be streamed on ESPN+ in the United States.

I do agree with you the only thing is Dubois needs to work extremely hard in training, Joe Joyce will come all night and has a chin of granite. Would be very shocked if he gets stopped but I see…

[QUOTE=Chippie;20464119]Tough fight for dubious, he couldn't take king pon Johnson out. Joyce will keep coming all night and so far shows to have a hell of a chin. Still fancy ddd to get the W but with a bit of…

Fight probably not happening with this coronavirus thing?

[QUOTE=slimPickings;20464121]I still think Dubois is untested. He will be tested in this fight. I suspect Joe will take him into deep waters and may end up drowning him.[/QUOTE] I tend to agree with this Joyce is robotic with his movements…

[QUOTE=Corelone;20464003]The way Dboi beat Fujimoto should worry Joe.[/QUOTE] This wins the award for the funniest comment of the day