NEW YORK – Jesus Cuellar hasn’t fought in 16 months and has moved up from featherweight to fight Gervonta Davis at 130 pounds.

Those are among the reasons Davis is consistently listed as an 8-1 favorite over Cuellar in their 12-round fight Saturday night. A confident Cuellar is certain there’s not nearly that much separating him from Davis and can’t wait to prove it when they fight for a vacant version of the WBA’s super featherweight title at Brooklyn’s Barclays Center (Showtime).

“He’s a good boxer,” Cuellar told BoxingScene.com through a translator after a press conference Thursday at Barclays Center. “He’s a good fighter, but that’s it. He’s definitely overrated. The only true great fighter in all of boxing is Mayweather. He’s no Mayweather. If people feel he’s Mayweather and if he thinks he’s Mayweather, he’s not.” 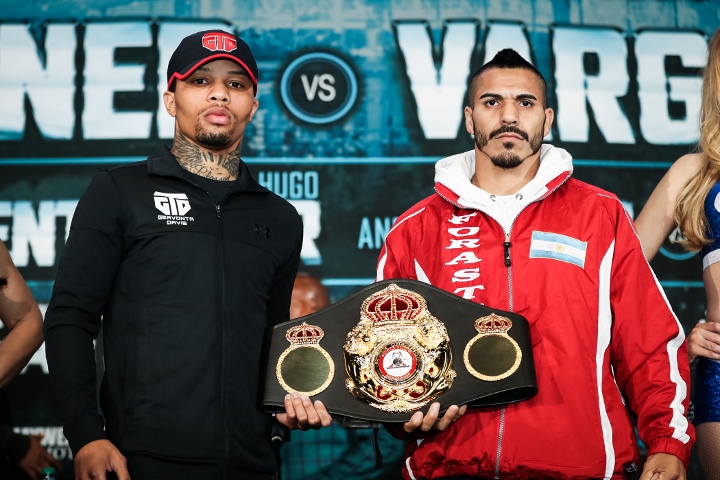 The retired Floyd Mayweather’s company promotes Davis, a fast, strong southpaw from Baltimore. Mayweather has avoided making comparisons between them so that he doesn’t put unnecessary pressure on Davis (19-0, 18 KOs).

Davis was just 22 when he stopped Puerto Rico’s Jose Pedraza (23-1, 12 KOs) to win the IBF super featherweight title in January 2017. He lost that title seventh months later because he couldn’t make weight before his eighth-round knockout of Costa Rica’s Francisco Fonseca (21-1-1, 15 KOs) on August 26 in Las Vegas.

[QUOTE=ELHITMAN606;18700508]Bunch of politics involved tbh but it was basically Jezreel Corrales fault[/QUOTE] Thank you for the info. Green K for that!

[QUOTE=daggum;18700574]i think he proved he's better than floyd with this destruction of an amazing opponent[/QUOTE] :lol1::lol1: