Jessie Vargas Very Focused on Winning a Third Title at 154

After fighting in back-to-back draws, both which could have gone his way, welterweight contender Jessie Vargas is not deterred about his future in the sport.

Fighting under a new promoter, network and trainer has given Vargas more motivation to continue being one of the top fighters in the welterweight division.

Vargas will face Humberto Soto in a crossroads clash Friday night at The Forum in Inglewood, California. The 10-round bout will be part of the stellar Matchroom Boxing card that will stream live on DAZN (7:30 p.m. ET/ 4:30 p.m. PT). 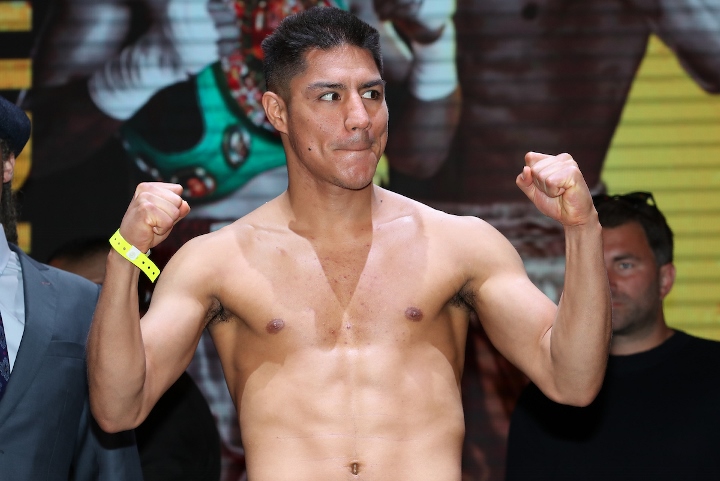 Vargas, who resides in Las Vegas, will be facing a fighter in Soto who has seen his best days behind him, but notched a convincing victory over Brandon Rios on Feb. 23 in Tijuana.

Vargas (28-2-2, 10 knockouts) is favored to win Friday night, but is not overlooking Soto.

“Soto is a two-division World Champion, too,” said Vargas at Thursday’s press conference. “He is a veteran. We are two Mexican warriors and we are going to go to war on Friday night on DAZN. Shout out to Soto for springing the upset against Brandon Rios to make this fight happen.”

The 29-year-old Vargas credits trainer Freddie Roach, who he began working with several weeks ago, for reinvigorating his career. Vargas believes Roach has pushed him to be his best.

“I need to take care of business against Soto,” said Vargas, who first signed a promotional deal with Top Rank. “I have trained properly but nothing is certain. I want to get a title in my third weight division. I left Vegas for camp for the first time in my career to train in Los Angeles. I had a great training camp with my amazing trainer Freddie Roach and I am ready for Friday night.”

Vargas, who is ranked in the top five in three of boxing’s major sanctioning bodies, including a No. 2 ranking by the WBA, believes a world title bout is around the corner should he defeat Soto.

Most of the world titleholders at 147 pounds are with Premier Boxing Champions (PBC), where he fought two of his more recent fights. Vargas is counting on promoter Eddie Hearn to follow through in putting him in the best fights possible and fighting on DAZN.

“Matchroom and DAZN are changing boxing and I am excited to be a part of this. Eddie had promised me things and he continues to come through with each and every thing that he has said.”

[QUOTE=Chrismart;19693419]I read a piece were he was talking up a fight with Laim Smith. I'd be down for that.[/QUOTE] Yeah I would tune in also.

Give me a beark. Focus on Soto. This bout will go the distance and Jessie Vargas better not try to play any games with Humberto Soto. If Vargas boxes and avoids the in-fight he is likely to outpoint Soto and…

Jessie Vargas and Kell Brook came close to fighting each other once, why did that fight fall through? I'd be up for that fight at 154, then the winner can fight for a title.

It is not going to happen, unfortunately for him his best days are gone. Plus, he has Victor Ortiz shoes to fill in.