Jessie Vargas Reflects Back, Praises The Speed of Manny Pacquiao

Former two division world champion Jessie Vargas recently explained that in his twelve year career, Manny Pacquiao is the best fighter that he ever faced in the ring.

He says Pacquiao's biggest asset in the ring is his lightning fast speed.

The eight division world champion was already 37-years-old when they collided in 2016 - with Pacquiao dropping Vargas down and winning a dominant twelve round unanimous decision. 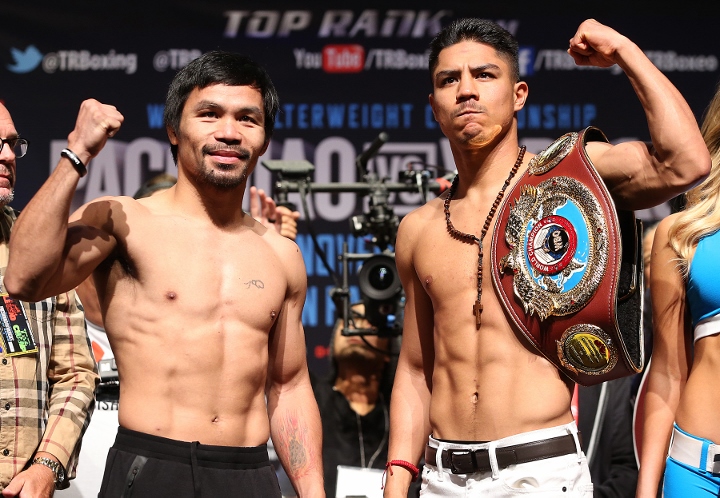 It was Vargas' first defense of his World Boxing Organization (WBO) welterweight title.

He says Pacquiao's speed was the key factor in the contest - not power, which Vargas says he never really felt in the contest. Vargas felt the rapid combinations always kept him on his toes and always looking for incoming shots raining down.

“His speed is dangerous. If you don’t see his punch, he can take you down,” Vargas stated during the Matchroom Lockdown Tapes series “I think it’s his positioning that gives him some of the power, but mainly it’s his speed. I’m sure he’s a power puncher, but I didn’t feel his power punches, honestly.

“I was in the fight. I started off real good, and then I get hit in the second round. “I’m coming in and I’m about to land a hard right, and I open up. But then I see him coming in with his straight left. I’m like, ‘Oh, no, pull back.’

“So instead of cocking it, I just pull out. In that second I pulled out, he ended up hitting me with a straight left that barely nicked me, barely got me. But since I was already pulling away, it was a knockdown. There goes that round. That round was in the bag, I felt, until that happened.

“It was a good fight. I gave it my all. Threw as many punches as I could. Things happen. It was a great learning experience.”

Jessie had no business in the ring with even an old washed Manny. That was a stay busy fight for the Pacman, he barely broke a sweat