Jessie Vargas: Keith Thurman is Irrelevant, No One Cares For Him

Jessie Vargas has yet to be in an easy fight. Or one that goes exactly the way it should play out.

The welterweight contender and former world titleholder understands not only what is at stake tonight, but all the obstacles that are in his way to achieve a win tonight.

Despite being the betting favorite in the eyes of many boxing scribes, he is listed as the B-fighter against Adrien Broner tonight at the Barclays Center in Brooklyn, New York. 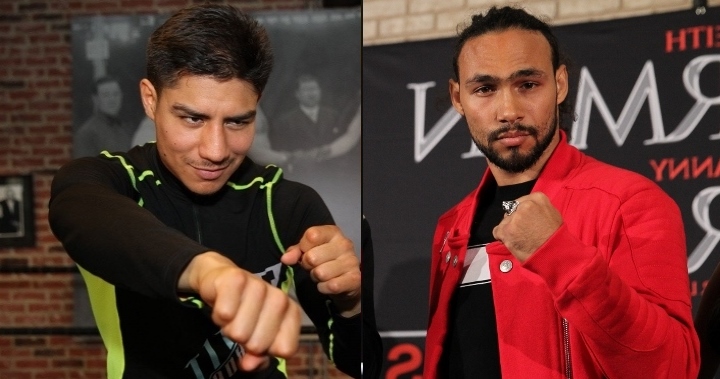 Vargas (28-2, 10 knockouts) returned to the ring from a 13-month hiatus on Dec. 15 in Lancaster, California, dropping gatekeeper Aaron Herrera en route to a one-sided decision.

The mild-mannered Vargas was animated at Thursday’s press conference, going back and forth with Broner. It is not the first time Broner does something to get a rise out of his opponents, something Vargas acknowledged.

“I have nothing against Adrien Broner,” Vargas told BoxingScene.com over the phone Thursday night. “He got under my skin. Maybe that’s what I needed to be more aggressive for (Saturday). I’m an athlete and I want to make the boxing fans happy.”

Vargas was a leading candidate to face Keith Thurman in March before the WBC/ WBA welterweight titleholder announced he would delay his return to the ring due to an injury suffered in training camp.

The announcement did not sit well with the 28-year-old Vargas, who believes Thurman wanted a more easier fight. Vargas thinks the sanctioning bodies should be consistent with their interpretation of the rules.

“Keith Thurman is irrelevant,” said Vargas, who’s only two losses were by decision to Manny Pacquiao and Timothy Bradley. “No one cares for him. Fans are realizing he doesn’t want to fight me. He’s injured again and the WBC and WBA may find a way to keep him happy. That’s an issue. I just hope that after I beat Broner that I have an opportunity to fight for those titles, whether it’s against Thurman or for a vacant title.”

Vargas, who is now being trained by former world titleholder Mike ‘The Bodysnatcher’ McCallum, was a staple on HBO telecast, and tonight will mark the first time he will fight on a Showtime telecast.

Not many fighters receive the types of opportunities some fighters do, but Vargas is grateful that he receives these opportunities and hopes to make the most out of them, particularly tonight.

“I’m always thankful for the opportunities to showcase my skills, and this Saturday is no different. Nothing is given to you. Whether you are a young fighter or an experienced veteran, opportunities come and go. I know what to expect because I’ve been there, but I don’t take anything for granted, especially this Saturday.”

Vargas will have his hands full against Broner tonight. He believes the opposition he has faced will be the deciding edge tonight.

A loss could seriously derail any opportunity again to fight on premium networks and a world title fight, but he believes the right mindset will carry him to a victory over Broner.

“The biggest fight to me is the next fight. Every fight is big. I wouldn’t be where I am if I didn’t carry that mentality and preparation. Everything is a process.”
“Broner is a talented fighter. I’m a very good fighter. I believe I’m a better fighter than him”

I hope Vargas wins tonight and the WBC makes HIM the mandatory for Thurman later on in the year, I would prefer that to the Porter or Danny rematch. Vargas is stiff, Thurman is going to really hurt him and…

[QUOTE=IMDAZED;18691844]I think that’s false. Take a look at Garcia and Porter’s opponents. They have fought top opposition throughout their career. They may not be willing to fight Spence (yet), but I have no doubt that they will, perhaps sooner than…

[QUOTE=Mammoth;18692232]Thurman beats him. Crawford would have if Vargas didn't leave. I like Vargas but i can't rank him that high.[/QUOTE] I rank him higher than most people do. But he's gotta stop changing trainers so much. I thought Dewey Cooper…

[QUOTE=Motorcity Cobra;18692194]Naw he left top rank because he wanted to fight the best welterweights. I'm not favoring any of those welterweights over Vargas except Spence.[/QUOTE] Thurman beats him. Crawford would have if Vargas didn't leave. I like Vargas but i…

Thurman is clogging up the division. Strip his ass. He don't deserve those belts. Injury or not other fighters wanna eat too.