Jessie Vargas Admits: Dulorme Was Better Than I Expected

Former two division world champion Jessie Vargas (28-2-2, 10 KOs) did not have the spectacular return that he expected, as he fought to a twelve round majority draw with Thomas Dulorme (24-3-1, 16 KOs) in the main event of a Matchroom USA card from the Wintrust Arena in Chicago.

Dulorme, who put in one of his best performances in some time and suffered a knockdown earlier in the fight, escaped a defeat when he dropped Vargas in the closing moments of the twelfth and final round. 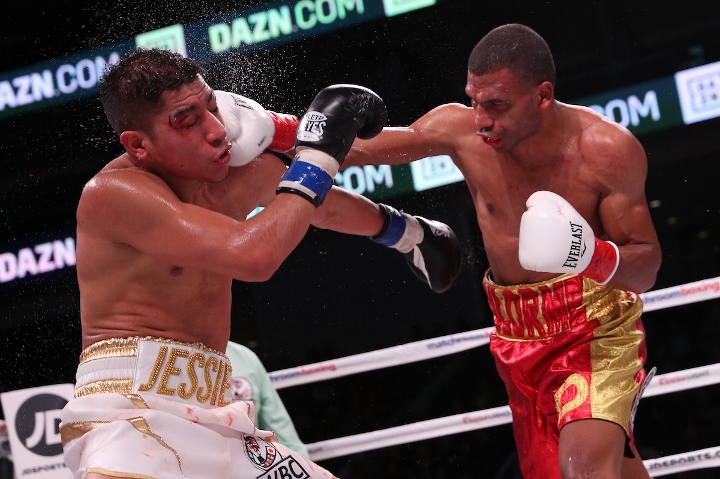 Vargas admits that he underestimated Dulorme a bit.

“He was better than I expected. All credit to him – he’s a very good fighter. He comes and gives it his all in each and every fight. Unfortunately we went in with a draw. I was looking forward to the victory," Vargas said.

“[The punch that dropped me], it really caught me by surprise, I’m not going to lie. I was really confident in the 12th round, thought I had everything in control. I started with a punch and then I went on the attack, I saw him coming, backed up, he caught me with the punch and I was knocked down.”

The draw verdict is the second in a row for Vargas, who fought to a draw with Adrien Broner earlier this year.

“This one was a good fight. The fans liked it. The last one brings a sour taste. This one I felt like I had the edge but I can’t complain about the draw. If that’s what the judges saw, all I can do it respect it," Vargas said.

And as far as his next move?

“I’m going to leave that up to my promoter Eddie Hearn and my advisors. Whatever they say goes. I’m looking forward to coming back real soon, but for now, it’s back to the drawing board," Vargas said.

Both are C class fighters

it was a decent fight

So is Dulorme, who was an ex-TMT fighter, a free agent now?

Vargas is a decent enough fighter, but like Badou Jack seems to be turning into one of the rarest things in professional boxing - a draw specialist.