MGM National Harbor,Oxon, Maryland - When two champions agree to unify their crowns, the best fans can hope for is they leave every bit of themselves in the ring pursuing greater glory. Almost from the clang of the opening bell, a pair of Jr. welterweight women did just that in one of the most relentless action fights so far in 2019.

The referee was Bill Clancy. 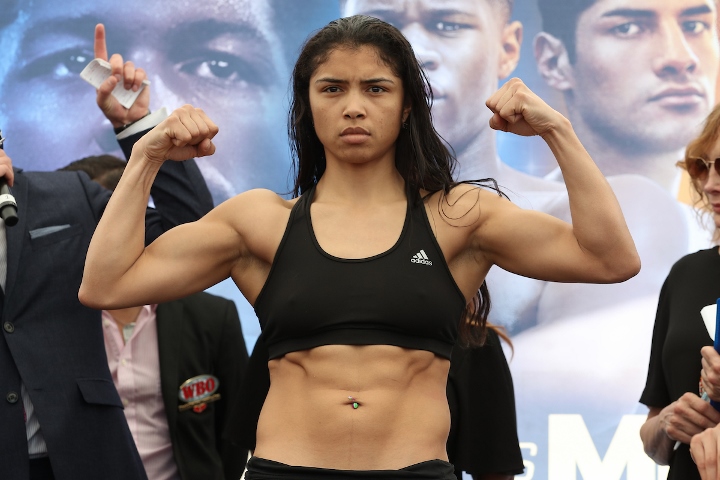 Sanchez seemed to have the better of several early rounds, her right hand landing almost at will in furious exchanges. The leather flowed like the sweat each sent flying from the other, round after violent round.

Exhaustion settling in during the later rounds, the pair seemed at times to be leaning on each other to stay up while continuing to let their hands go. Round nine ended with Sanchez on the ropes, blood and drooled cascading to the mat as she bent over after a McCaskill right hand. What looked like a knockdown initially was ruled a slip and one could wonder if Sanchez had the reserves to endure two more minutes.

She did and both women emptied what remained in their tanks in the final two minutes. Sanchez stood her ground at mid-ring and refused to let McCaskill overwhelm her on the ropes. As the final bell sounded, Sanchez was still punching. It was fair to feel like it was all either valiant warrior had done since the start.

The scores didn’t seem to reflect the battle. While McCaskill’s second half was worthy of a win, tallies of 98-91 and 98-92 read wide while McCaskill’s other winning scorecard, at 96-94, reflected what those in attendance saw as a close contest. The victor appreciated what she’d just endured. “It was for sure nonstop…Anahi has great accuracy and solid power. She sure wasn’t afraid to fight and mix it up.”

McCaskill, to her credit, acknowledged how wide the cards were. “The scorecards were a little drastic and I don’t like when that happens to me when I go somewhere else so respect to Anahi.” As to the obvious question after such a memorable encounter, McCaskill was cautiously open to a sequel. “I have to talk to (promoter) Eddie Hearn and my manager about that. But like I said, it was a great fight, she is a great fighter and I enjoy a good challenge.”

McCaskill makes it two straight wins since a loss to current undisputed lightweight champion Katie Taylor in December 2017. Sanchez has a two-fight win streak halted after her own loss to Taylor in October of the same year.

The now-former WBA champion was disappointed in the outcome and scoring of the bout. “I don’t think the judges gave me any love on the scorecards. I was getting hit low, I was getting headbutted but I didn’t get any love from the judges or the referees.” She can take solace in the love received from everyone who saw the fight as she hopes for a return.

Their "bombs" = getting tapped with socker boppers. I think I saw a total of 3 jabs thrown the whole fight. It was a fun watch tho, but I thought my girl Sanchez won. McCaskill = The women version of…

I had it a draw or Sanchez winning by 1 round. I just don't see how all those massive shots she was hitting McCaskill with didn't count

Jessica is a nice lady. Been by their gym they’re good people. Congrats to her.

I had 98-92 lol. Sanchez was just eating shots. Best fight on the card IMO. [QUOTE=Santa_;19771837]GREAT fight, HORRIBLE scorecards lol.[/QUOTE] I didn't have a complaint about the cards, though I did say to the wife mid fight "2 round fights…