Moving up in weight and matched against the longest-reigning champion ever in women's boxing, Jessica McCaskill ultimately made history her story.

The unified 140-pound titlist from Chicago denied Norway’s Cecilia Braekhus sole possession of one of boxing's most cherished milestones, scoring an upset 10-round decision win. McCaskill met Brækhus at an agreed-upon 145-pound catchweight, moving up in weight but ultimately proving that size doesn't matter in taking down the undisputed welterweight queen Saturday evening from a makeshift outdoor venue in downtown Tulsa, Oklahoma.

Judge Karen Holderfield had it even at 95-95, overruled by judges Gerald Ritter and David Sutherland who had it 97-94 and 97-93 for McCaskill.

Prior to the cards being read, it was anyone’s guess as to what would transpire.

“I was thinking to myself that it takes a lot to take it away from the champion,” McCaskill said of those final moments holding her breath before being able to exhale in celebration.

The bout came four months after the original April 17 date on which it was supposed to take place, at MGM National Harbor in Oxon Hill, Maryland. The ongoing coronavirus pandemic shut down the event, leaving both boxers to quarantine in their respective training camps—Brækhus in Big Bear, California, while McCaskill was literally living in her gym in Chicago—all the way through a second camp to prepare for what was the first-ever female fight to headline a DAZN-USA telecast.

McCaskill admittedly planned to measure up Braekhus in the opening round before digging into her offensive. Whether it was a ploy or she simply saw an unexpected opening, McCaskill let her hands go early, negating a considerable height and reach advantage by quickly working her way inside. Braekhus remained poised under pressure, using her long jab to create her desired space. McCaskill landed the best punch of the round, fighting out of a clinch to connect with an overhand left.

Both boxers looked to establish the jab in round two. McCaskill used her weapon as a power punch, committing to the stick and following with right hands. Braekhus was clearly uncomfortable with her opponent’s aggression, looking to clinch on the inside only to have to defend from overhand rights. McCaskill closed the round landing a three punch combination upstairs. 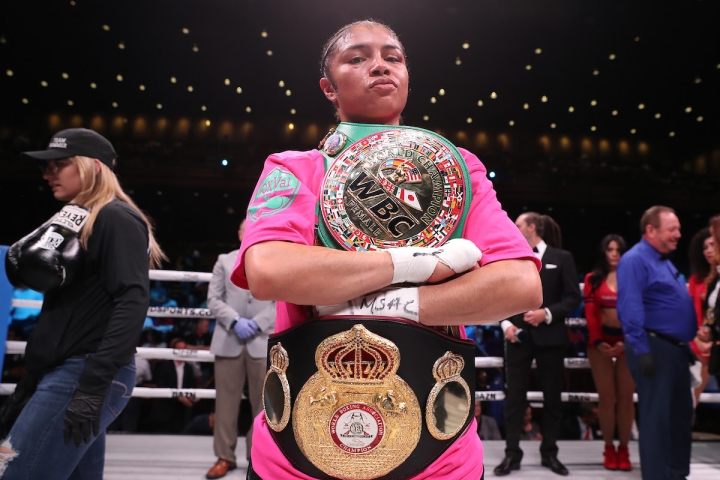 Braekhus found her offense in round three, working her jab after withstanding an early rush from McCaskill. Momentum carried over into round four, though not a firestorm of activity in either direction as both boxers fought at a distance.

McCaskill reclaimed momentum in round five, using lateral movement to set up her heavier power shots. A stationary Braekhus left herself open for a long right hand from McCaskill, snapping back the head of the defending champ.

Braekhus made a point to bounce on her toes more in round six, working her jab and scoring the occasional chopping right hand. McCaskill walked through Braekhus’ best punches, landing a counter right hand over a jab and catching her taller foe clean on the chin.

With the fight potentially slipping away, Braekhus enjoyed her best two-minute sequence of the fight in round seven. The long-reigning welterweight champ continued to fight on her toes and create space, outlanding the 140-pound titlist though McCaskill scored with the best punch of the round— a right uppercut on the inside.

Round eight saw Braekhus do her best work of the fight in keeping McCaskill at bay with her jab. It allowed the self-proclaimed “First Lady” to control the pace, with McCaskill’s best moments in the round coming whenever the two were at close quarters, offsetting Braekhus’ constant leaning on the back of her neck to land with short rights inside.

McCaskill managed to draw in Braekhus with head feints, slipping jabs and countering with right hands. Braekhus adjusted later in the frame, landing her jab and the occasional chopping rights as McCaskill’s offense dropped perhaps at the wrong time in the fight.

McCaskill came out for the 10th and final round fighting like a challenger who needed to make a statement to unseat the longest-reigning champion in women’s boxing history. Right hands landed for McCaskill as Braekhus spent the round fighting in reverse.

As it turned out, it wasn’t even needed.

McCaskill improves—in every sense of the word—to 9-2 (3KOs) with the win. It marks her third time in four fights where she has unseated a reigning champion, all coming after a hard-fought 10-round loss to Irish superstar Katie Taylor in December 2017.

Since then have come 140-pound title wins over Erica Farias—marking the first-ever female fight to air on DAZN-USA in October 2018—and Anahi Ester Sanchez (May 2019) in back-to-back fights, followed by a repeat win over Farias last October. At no point has McCaskill ever doubted herself, although she knew better than to take her victory lap until hearing ‘…and the new.’

Most others in defeat would consider anything but, though it’s not the case for Braekhus. She suffers her first career loss on a night when she sought to rack up more successful title defenses than any other boxer in history. Instead, she remains tied for the all-time mark—male or female—with World heavyweight champion Joe Louis, as her 11-year, 25-defense reign comes to a close as she falls to 36-1 (9KOs).

There was a case to be made that she deserved that mark and the spotlight all to herself. Even if it’s how she felt, the long-reigning champ and pound-for-pound entrant was never going to say that out loud.

“I don’t want to talk about (the decision) right now. I just want to congratulate Jessica,” the ever classy Braekhus graciously stated in defeat. “She really wanted it. She did a great job and I’m proud and happy to pass the torch to her.”

The fight was certainly competitive enough to warrant a rematch, never mind it being par for the course whenever a well-established champion loses the crown. Perhaps that day will come for Braekhus… or perhaps she will simply settle for all that she has accomplished in the sport of boxing.

From making boxing legal in her home country of Norway, to serving as undisputed champion for six years and holding at least one title for more than a decade, Braekhus undoubtedly left behind an amazing legacy that will be tough to match.

“I don’t know what will happen right now,” admitted Braekhus. “But I’m so proud to be part of women’s boxing right now. If this is my last fight, I can leave boxing saying that I was a part of this. I took part in women’s boxing at this level. That will be my biggest achievement.”

McCaskill’s biggest achievement in the ring took place on Saturday. From overcoming homelessness to developing her full-time boxing career around another full-time job as an investment banker, the 36-year old has managed more than most others will ever accomplish.

Unlike her most recent ring rival, she’s not even close to being done, although she will have to wait at least a week before deciding her next move.

Ireland’s Taylor (15-0, 6KOs) puts her own undisputed championship and pound-for-pound status on the line as he faces Belgium’s Delfine Persoon next Saturday in Brentwood, Essex, England. The bout is a rematch to their 10-round thriller last June, which Taylor won by majority decision in a fight that could’ve went either way.

Original—though unofficial—plans called for Taylor and Braekhus to square off in a massive superfight had they both emerged victorious. Those plans are obviously up in smoke, though there still exists an alternative.

Whatever comes of her future, McCaskill can look with pride knowing her name is forever etched in history—-including her part in denying it for another.