Jerwin Ancajas Takes Out Miguel Gonzalez in Six To Retain

With the victory, Angajas (32-1-2, 22 KOs) made the eighth successful defense of the IBF junior bantamweight title.

The southpaw Ancajas last fought on May 4 in Stockton, California, knocking out Japan’s Ryuichi Funai after the sixth round. Prior to the Funai fight, Ancajas fought to a disappointing split-decision draw against Alejandro Santiago on Sept. 28 of last year. 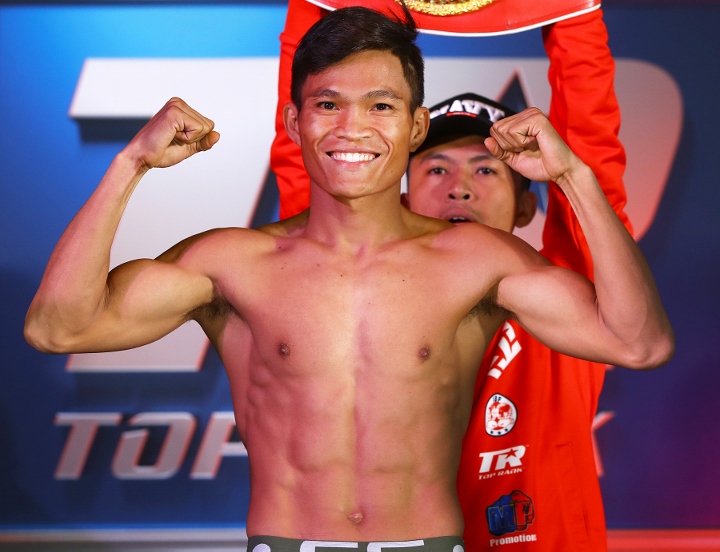 Gonzalez has won his previous two fights since getting stopped in round eight by Andrew Moloney on Mar. 22 of last year.

Saturday night marked a different start to a fight in recent years for Ancajas as he was the more aggressive fighter from the opening bell. Ancajas closed the distance between the two fighters, sitting down on his punches and connecting to Gonzalez’s head and body.

Gonzalez was game, but he began to fight defensively by the fourth round. His punch output dropped considerably with each passing round.

Sensing Gonzalez was weakening, Ancajas went in for the kill during round six. Ancajas overwhelmed Gonzalez, landing at will with several hooks and crosses to the head. During a sequence, Gonzalez was stunned, prompting Ancajas to follow up, prompting referee Wayne Hedgpeth to stop the fight at 1:53.

The 27-year-old Ancajas, who resides in Cavite Ciy in the Philippines, is hoping to unify against any of the top fighters at 115 pounds. He is co-managed by WBA welterweight titleholder Manny Pacquiao.

Gonzalez, who resides in Santiago, Chile, drops to 31-3, 8 KOs. He has split his last four bouts.

Ancajas looked to turn the page and fought in a way which suits him better. His attacking style in that fight to me, looked like he was much more in controll. He has alot more pop in his punch without…

Ancajas Vs Yafai makes for a good 50/50 unification.

Ancajas and Nietes are being avoided.:moon:

Bumcajas needs to step it up in competition! Bumcajas is so protected!

Ancajas would fight Estrada in Mexico!? He needs to move up to loaded 118 pounds if no unification in 2020. Bob Arum is to busy with Lomachenko and Crawford forgetting Ancajas and remembering Ruiz after his gone.