Jerwin Ancajas: Nothing Changes, I Want All Champs at 115

Oracle Arena, Oakland - The “Pretty Boy” didn’t have an easy night at the office. Jerwin “Pretty Boy” Ancajas made the sixth defense of his IBF junior bantamweight world title, battling to a draw against Alex Santiago. The scorecards read 116-112 Ancajas, 118-111 Santiago, and 114-114.

“It was a good, entertaining fight,” Ancajas said. “My timing was a little off. He was a little awkward. I felt like I pressed the fight and did enough to win.”

Ancajas (30-1-2, 20 KOs) was forced into a firefight against the hard-charging Santiago (16-2-5,7 KOs), who was making his first attempt at a world title. Santiago landed a flush combination on Ancajas’ jaw to end the second round, a sign that it would be a long evening for Ancajas.

It was the stiffest test of Ancajas’ two-year title reign, a closely contested affair with a number of razor-thin rounds.

“I still want all the champions at 115,” Ancajas said. “Nothing has changed." 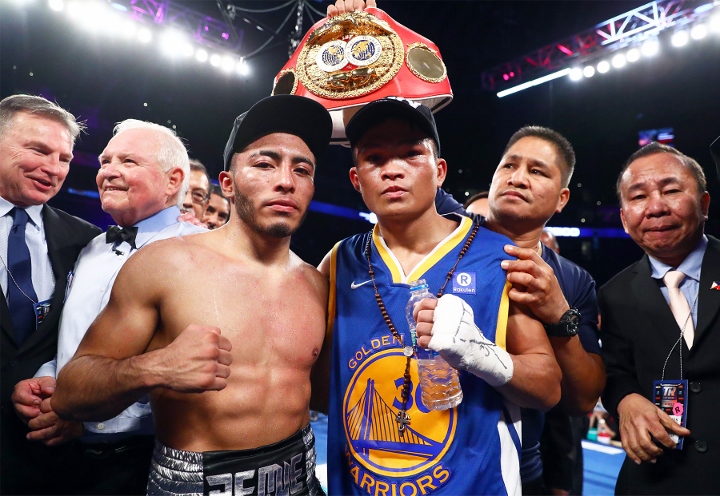 Almikhanuly said: “I felt very good in there. I'll be back soon and perform even better."

Ualikhanov said: "Everything went well tonight. It was a good experience. Hernandez was a tough guy who made me work hard every single round."

Greer said: “I’ came here to make a statement, and I did. Nobody has ever stopped him that fast. I’m ready for anyone at 118 pounds. I’m the best. Watch out because ‘Don’t Blink’ is coming!”

[QUOTE=warrenchico;19154813]Saw this fight twice, I had to see the last one in slow motion, only during exchances because there were so many close rounds. Barrios did great in this fight, was a fast counter puncher, and not afraid to go…

[QUOTE=HumanBag;19153011]Alright man i've finally watched it and i got it 8-4 ancajas. Just cleaner busier,more consistent jab and straight to the body. While barrios did have moments it was brief more eye catching maybe but not enough. I only got…

[QUOTE=Laszlo;19153833]Your just lying. Deep down you know Jerlvin is a bum. :beerchug:[/QUOTE] Nah man im as honest as a suspect being interrogated by fbi.[QUOTE][/QUOTE]

[QUOTE=HumanBag;19153011]Alright man i've finally watched it and i got it 8-4 ancajas. Just cleaner busier,more consistent jab and straight to the body. While barrios did have moments it was brief more eye catching maybe but not enough. I only got…

[QUOTE=Laszlo;19151968]Just go watch the fight dude. It wasn't close at all. Jervis got smashed up by a bum dude. He's not troubling anybody. :lol1: Coward is just begging for a payday[/QUOTE] Alright man i've finally watched it and i got…