Jerry Forrest: The People Know That I Won My Fight With Jermaine Franklin

Forrest lost a 10-round split decision to Jermaine Franklin last July 12, but the veteran heavyweight thinks those that watched their fight know he deserved to win. Judge Hunter Walton scored that fight 96-95 for Forrest, but he was overruled by judges Alan Krebs and Tim Wood, both of whom scored it 97-93 for Franklin.

“That’s just the politics of boxing,” Forrest told BoxingScene.com. “When you don’t do what they want you to do, or you don’t agree with what they’re looking for you to agree to, I feel like they take advantage of the fighter. And that was just a small case of it. When you don’t wanna sign with someone, boxing can become a corrupt sport. I still won, even though I lost, simply because everyone was able to see exactly what I did and what I could do.

“It worked out. It really got me noticed to where I got the contract that I got, actually. There were a lot of plusses from the loss. The people know that I won that fight. I feel like nowadays I’m more like a people’s champion. The boxing world is starting to notice me, but I feel like people are gravitating toward me more.” 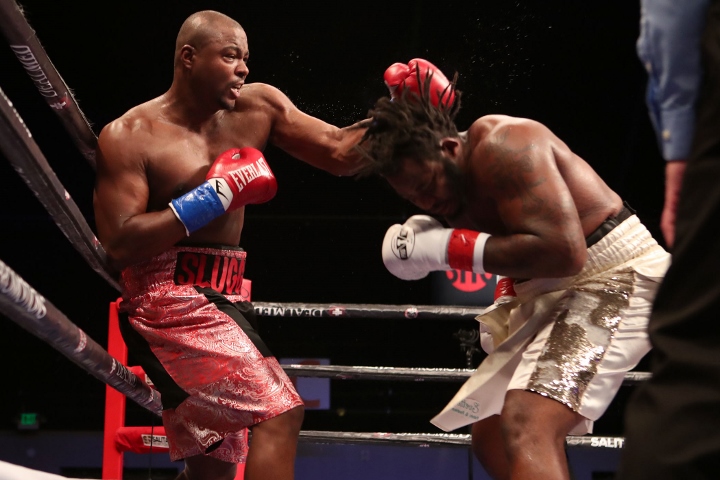 Franklin (20-0, 13 KOs), of Saginaw, Michigan, is represented by Salita Promotions, which Forrest contends tried to sign him to a contract prior to him facing Franklin. Dmitriy Salita’s company was the promoter of record for that show, which aired as part of Showtime’s “ShoBox: The New Generation” series.

“It was a great fight for Jermaine,” Salita said. “He got tested. I’m glad to see Jerry getting another opportunity. First it was against Jarrell [Miller], and now it’s a much more winnable fight, a fight that he may win. I feel that it’s kind of a 50-50 fight [against Takam]. Jerry’s a good fighter. He came prepared and he gave Jermaine the test that he needed. I think Jermaine is the best young American heavyweight/contender. He’s only 26 years old. And I think he has the ability to reach the highest level. Whether he’s gonna do that or not is up to him, but he has the ability to do that.

“Jerry Forrest took the opportunity, as he should have. He didn’t get intimidated by fighting in his first main event on national television. That means he’s a real fighter. He’s gonna do a great job in this fight coming up [Thursday night]. It was a good, competitive fight, but to me, Jermaine clearly won it. Jerry Forrest played exactly the role he was supposed to play, to give a test to a young guy.”

The Forrest-Takam match will headline a telecast set to start at 8 p.m. ET/5 p.m. PT.