Five days out from the biggest fight of his career, Jerry Forrest put on his protective mask, loaded up his vehicle and headed to the beach with his family.

He’s a day or two away from flying to Las Vegas, where he’ll take on Carlos Takam in the main event of an installment of Top Rank’s summer series on ESPN, inside “The Bubble” at the MGM Grand. His demeanor would seem rather relaxed for someone who not only has a high stakes bout in a few days, but has had a dramatic and frustrating few weeks to even get to this point.

The 32-year old heavyweight contender was originally slated to face Jarrell “Big Baby” Miller, who failed a drug test for the third time in his fighting career. The bout was cancelled as Miller was immediately suspended by the Nevada State Athletic Commission. Though Takam would be found as a new opponent fairly quickly, there remains some frustration in Forrest, particularly about the fact if not for accurate testing, he might have been in the ring with an illegally enhanced foe.

“That's who he is. When someone shows you who they are, you believe them. He's shown us who he is multiple times. It's time for people to believe him,” Forrest told Boxing Scene. “Unfortunately, the way I look at it is, I don't know him as a person, but, I am going to assume he's a bad guy. Any time you're willing to cheat and use PEDs in a sport where you're physically hitting someone, to me, that's attempted murder in my eyes, because we can kill anyone with one punch.”

As far as short-notice replacements go, Takam is likely as good as it could possibly get. Takam has challenged for a world title in the last three years, and has faced the likes of Anthony Joshua, Alexander Povetkin, Dereck Chisora and more. One could even argue that he is more accomplished as a boxer than Miller is. In fact, sportsbooks still favor Takam despite the late notice.

“Certain fights will you respect and give people insight into who you are. Takam is a very hard fighter. The boxing world knows that, but people don't know that. The world is going to tune in regardless, but they don't get to see me beat that big name that they're familiar with,” said Forrest. “In the boxing world, the reward for Takam is probably going to be more intriguing because he's a better fighter. But to the common eye, they want me to fight the guy that was just on steroids, that was all in the newspapers, but hey, it is what it is.”

Given Forrest’s background, it should come as no surprise that he prefers things be done on the up and up. The son of a mother in the CIA and a father highly ranked in the military, Forrest went on to become a nuclear electrician. It’s a job he held from 2012, around the time of his pro debut, up until late 2019. For over seven years, he worked a minimum of eight hours a day, six or seven days a week, on top of his training as a professional boxer. Inside the ring he was risking his life, but at his day job he was protecting the lives of others, ensuring the safety of submarines and the sailors at sea within them. 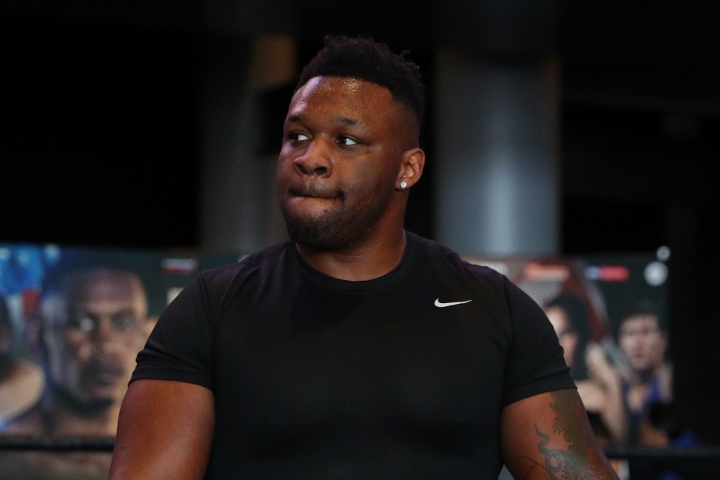 It wasn’t uncommon for calls to join prominent heavyweights’ training camps, or even fight offers to come in that he simply couldn’t take due to his work schedule.

“I did it as long as I could. I didn't make $100,000 a year, but I was making 70, 80 thousand dollars a year at a job where I can make more doing overtime. I had a great job, the possibilities were endless. I literally didn't take job promotions because of boxing. I did what I could with what I had and the best that I could balance it until I no longer could balance it anymore,” said Forrest. “To fully dedicate yourself to it, you can't do it with a full-time job. I'm not saying you can't be a world champion with a full-time job, but I feel personally that you have to dedicate yourself 100% to something to be great at it.”

For over half a year now, Forrest has been a full-time fighter for the first time in his adult life. But it hasn’t been possible without the family structure that moulded him. Five years ago, Forrest, his wife and children sold their house and moved into his parents’ five-bedroom home. The added assistance of child care and lessened financial pressure have now helped him fully chase his boxing dreams.

“This was the plan. For years, my parents, her parents, we planned this. People see me as the end product because I'm a boxer, but my wife, my mother-in-law, my parents, they watch the kids when we can't watch them. It's a whole system beside me. It's truly Team Forrest,” he said.

His drive to the beach on Sunday morning harkens back to the days when his father would take him for rides around the city and play motivational tapes in the car. His father would instill in him the values of honor and discipline, and the requirements for chasing and achieving greatness, quite literally putting them on loop in his mind.

Forrest has shown honor and valor even when his original opponent didn’t, and through his discipline, has remained in a position to prove his level of talent on Thursday night.