Charlo was originally slated to face WBC super welterweight champion Tony Harrison who upset him in December. Harrison pulled out of the rematch with an injury and the fight is expected to be rescheduled for later in the year.

Jesus Ramos (9-0) opened up the preliminary bouts on FS1 with a shout out victory over Kevin Shacks (3-3-3) in their welterweight bout.

Shacks started out very aggressively, taking the fight to Ramos who was content to counter punch. Head clashes are quite common when a southpaw faces an orthodox fighter and a clash of heads produced a cut over the right eye of the southpaw Ramos in the second round.

Ramos picked up the pace in the 3rd round and hurt Shacks with several hard shots and continued to dominate the action throughout the 4th round. The final scores were 40-36 on all three scorecards.

Lightweight prospect Julian Rodarte (17-0-1) kept his perfect record intact with a unanimous decision victory over Miguel Angel Aispuro (11-8-2) in an exciting contest. Neither fighter took a step back but Rodarte was the busier man and was a lot more effective with his punches. The final scores were 77-75 twice and 78-74.

In super featherweight action, Leduan Barthelemy (14-0-1) dominated Jose Cayetano (21-6) over 8 rounds. Barthelemy is 6" taller than Cayetano and enjoyed a signficant reach advantage over Cayetano who was simply too slow to get inside often enough to do any damage. The final scores were 80-72 on all three scorecards. Leduan is the brother of former two-division champion Rances Barthelemy.

In the opening bout, Lucas Santa Maria (9-1-1) Marquis Taylor (10-1-1) battled to a majority draw. Both fighters threw a lot of punches but neither was really able to hurt the other man. The final scores were 78-74 in favor of Santa Maria and 76-76 on two judges' scorecards. 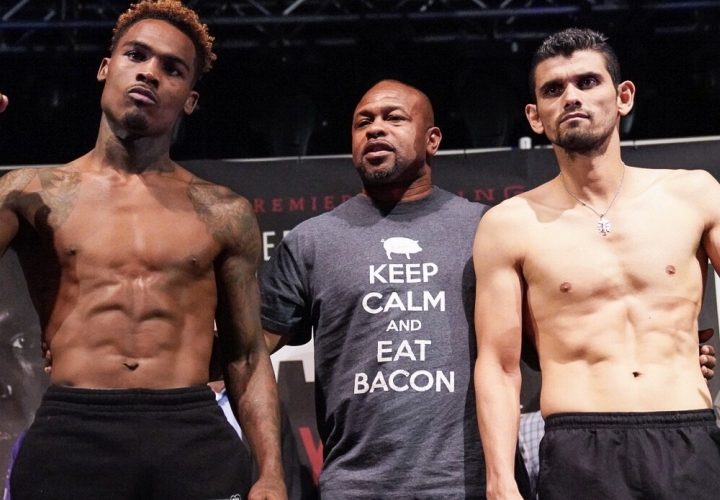