Jermell Charlo: They Know Harrison Ain't On My Level

ONTARIO, California – In hindsight, Jermall Charlo considers his loss to Tony Harrison exactly what he needed at that point in his career.

Charlo became complacent as the WBC super welterweight champion. Losing that title and his perfect record challenged Charlo to “dig deep” and improve after suffering his first professional defeat.

Houston’s Charlo cannot wait for the opportunity to prove Saturday night that he learned an invaluable less from losing a 12-round unanimous decision to Detroit’s Harrison last December 22 at Barclays Center in Brooklyn. Despite that defeat, handicappers have made Charlo (32-1, 16 KOs) a 3-1 favorite to regain his WBC 154-pound crown from Harrison (28-2, 21 KOs) in a fight FOX will televise from Toyota Center (8 p.m. ET/5 p.m. PT).

“I’m a fighter that live and learn,” Charlo told FOX’s Heidi Androl during a press conference Thursday at Toyota Center. “You know what I’m saying? We know how to progress. So, it’s OK for me to understand how to go down and come back up. But when I come back up, I come back up way harder. This was a learning lesson, the best thing that ever happened to me. They made the true champ come out.

“You know he ain’t on my level. I’m not gonna say you, but, you know, they know he ain’t on my level. They know what I possess. They know what I stand [for] and what I mean, and how I stand by what I mean. I’m one of the fighters – it’s easy to not like me. But, you know, that has nothing to do with what I’m gonna do to him Saturday.” 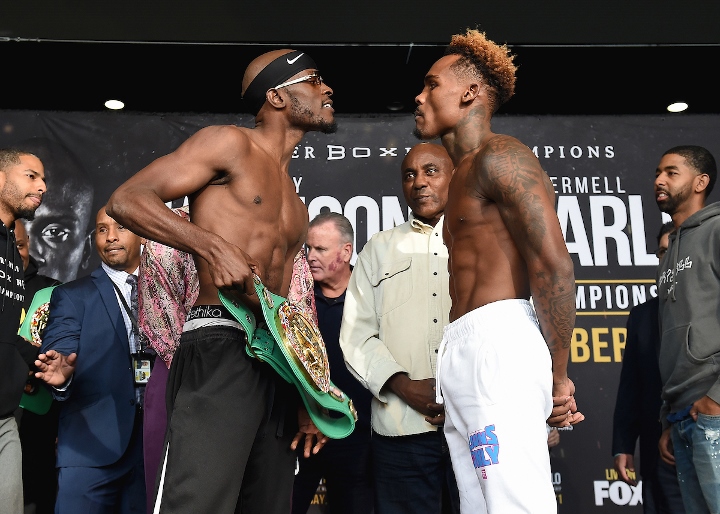 Harrison, 29, will end almost exactly a one-year layoff when he encounters Charlo again. Their immediate rematch was postponed from June 23 until Saturday night because Harrison sustained an ankle injury that forced him to withdraw from it six months ago.

[QUOTE=steeve steel;20270996]Don't you just love when fighters says losing was the best thing that ever happened to them?[/QUOTE] Sometimes it's true. In Joshua's case, I think losing to Ruiz did him good. We'll see tonight if Jermell has also learned…

Who the hell is they? As Uncle Roger would say: Most People Don’t Know S_it About Boxing!

if he "aint on your level" then who was the guy Harrison handed their a$$ to a year ago?? very strange

Don't you just love when fighters says losing was the best thing that ever happened to them?