Jermell Charlo: I Hope That Me & My Brother Proved All These Haters Wrong!

UNCASVILLE, Connecticut – Jermell Charlo hopes the impressive victories he and his brother delivered Saturday night will sway their detractors.

The IBF/WBA/WBC 154-pound champion admits that the negative energy from their doubters has provided plenty of motivation during their respective runs in the junior middleweight and middleweight divisions. He still wants the respect he is certain that the Houston natives earned by winning fights that were considered dangerous.

Jermell Charlo (34-1, 18 KOs) knocked down the Dominican Republic’s Jeison Rosario (20-2-1, 14 KOs) three times and stopped him with a jab to the body early in the eighth round of their 12-round title unification fight early Sunday morning at Mohegan Sun Arena. On the undercard Saturday night, Jermall Charlo (31-0, 22 KOs) hurt Sergiy Derevyanchenko (13-3, 10 KOs) late in the third round, took the unrelenting Ukrainian contender’s best punches and decisively defeated him on the scorecards in their 12-round fight for Charlo’s WBC middleweight title.

“I hope that we proved all of these haters wrong tonight,” Jermell Charlo said during a post-fight press conference, “because I seen a whole lotta yak on that Instagram and on them Twitters and all of them pages, and all of that media. I heard our own boss that own Showtime [president of sports and event programming Stephen Espinoza], like I said, he said that, you know, ‘Don’t be surprised if both of the Charlos lose.’ Sh-t! They don’t understand the skills and the levels of boxing, and that’s what we present.” 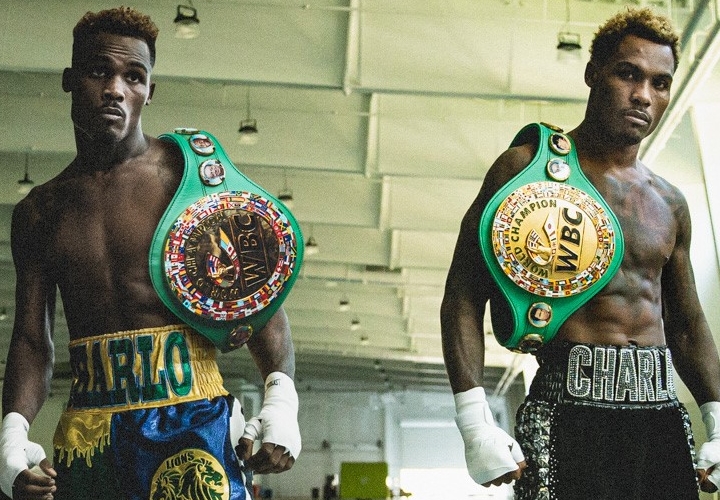 More than anything, Jermell Charlo wants their wins Saturday night to make boxers they’ve admired to start supporting them.

“I hope some of the greats in the past [of] boxing start rocking with me and my brother,” Jermell Charlo said. “We feel like we’re alone in this world, and that’s why we’re taking everybody out, one by one.”

The Charlos celebrated toward the end of Jermell Charlo’s press conference early Sunday morning. They posed for pictures with their belts and thanked their “haters” for fueling them to prove themselves against top opponents in this Showtime Pay-Per-View event.

“It’s jet fuel,” Jermell Charlo said before referring to his unanimous-decision loss to Tony Harrison in December 2018. “They messed up when they robbed me out that one fight. And because they don’t rock with us, and we’re not the world’s favorite or the greatest fighters to them, and we got so much to work on, everybody got criticism. They have so much more that they dealing to us, and it’s building up that fire and that ammo. So, we here for it. We here to stay. … Everybody in boxing – the Charlo twins are taking the f--k over!”

I enjoyed the ppv. They earned another ppv buy with a good undercard from me.

Good job charlos you went from kittens to bob cats! Keep up the work!

It's like they always just "miss" the names to beat. 50-60 fight in between them, and not a Lara, Andrade, Canelo, GGG, BJS, Daniel Jacobs etc.

Charlo brothers or anyone from Charlo's team reading this: You're good fighters. We know that. You are both very talented and can go far in boxing. You're among the best boxers in the world in your weight classes. But we…

[QUOTE=factsarenice;20783679]Charlo was offered 10's of millions...he said no. Case closed....NEXT! You can't make this stuff up.[/QUOTE]Have you forgotten that no sooner than Jermall Charlo became Canelo's WBC mandatory challenger that Mauricio Sulaiman elevated him to Franchise champion status; So this…