Jermell Charlo took out all of his frustration on Jorge Cota on Sunday night.

The former WBC 154-pound champion dropped the Mexican veteran twice and viciously knocked him out in the third round of their scheduled 12-round fight, the main event of a “FOX PBC Fight Night” broadcast from Mandalay Bay Events Center in Las Vegas.

Right hands by Houston’s Charlo (32-1, 16 KOs) twice left Cota flat on his back before referee Jay Nady stopped their bout at 2:14 of the third round. Most oddsmakers installed Charlo as a 50-1 favorite over Cota (28-4, 25 KOs), who was knocked out for the third time in his 10-year pro career.

“I wanna give a thank you and a congratulations to Jorge Cota,” Charlo said. “Even though he took the defeat, he still stepped in the ring. You know, the guy that [has] the title backed out the fight, and he was the one who stepped in the ring as fast as he did.”

The 29-year-old Charlo was supposed to fight Tony Harrison in an immediate rematch Sunday night, but Harrison suffered an ankle injury while training. Cota replaced Detroit’s Harrison (28-2, 21 KOs) on just three weeks’ notice once Harrison withdrew to have surgery June 5 to repair ligament damage to his ankle.

Harrison upset Charlo by unanimous decision to take the WBC super welterweight title from him December 22 at Barclays Center in Brooklyn. Charlo claimed before he fought Sunday night that Harrison had been knocked out in sparring and faked his ankle injury.

The 31-year-old Cota fought for the second time in nine weeks. He lost a split decision to the Dominican Republic’s Jeison Rosario (19-1-1, 13 KOs) in that 10-round battle April 20 at Dignity Health Sports Park in Carson, California.

Cota kept this fight competitive for all of two rounds Sunday night. 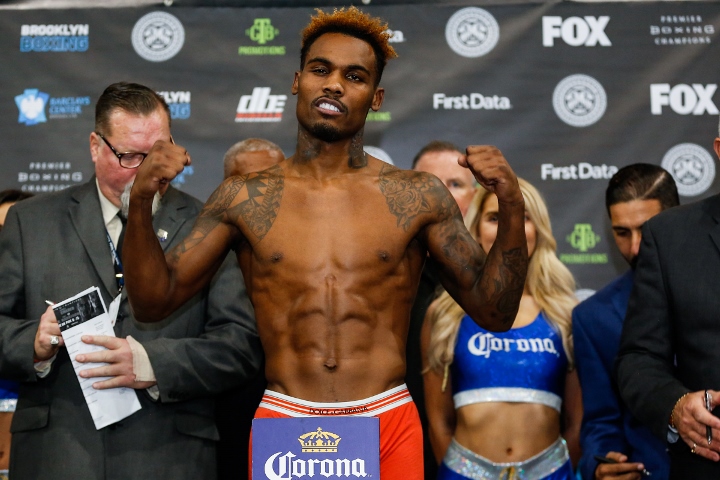 A crushing right hand by Charlo knocked Cota flat on his back with 2:32 to go in the third round. A disoriented Cota got up and tried to continue, but he used the top rope to hold himself up before Nady allowed the action to resume.

Charlo immediately hammered him with another devastating right hand. That shot sent Cota flat on his back again.

Nady stopped the fight immediately. Cota was sprawled out canvas, with half of his body underneath the bottom rope.

Charlo bullied Cota into the ropes with just over a minute to go in the second round, but he smothered himself and didn’t land anything clean. Cota clipped Charlo with a left hand just before the second round ended.

Charlo caught Cota with a straight right hand that backed him up just after the halfway point of the first round. Cota connected with a straight left hand when there were about 15 seconds to go in the opening round.

All three judges scored the first round for Cota, but it didn’t take Charlo too long to figure out how to put away the rangy southpaw. Now that he has won what amounted to a tune-up fight, Charlo hopes his rematch with Harrison, who attended Sunday’s card, can be rescheduled toward the end of the year.

[QUOTE=IRONCHINHAGLER;19888070]insecure juvi!![/QUOTE] Couldn't name a company. Like I thought! Checkmate

[QUOTE=Sweet_Science2;19879884]I only named Haymon fighters [email protected] And the fighters you named aren't Haymon top fighters. Joshua was supposed to be number 1 right? Got his ass beat. Martin was never considered p4p [email protected] Wilder laid Fury out like a $2…

[QUOTE=IRONCHINHAGLER;19879722]yea yea Juvi...and Aj beat the crap out Pbc undefeated Hw’s Martin and Breazeale...so wat! And Wilder got schooled and clowned by Feather-fisted Fat Fury and got a swollen left eye and gift draw!! Haymon an advise...and Pbc has multiple…

[QUOTE=IRONCHINHAGLER;19878659]are u still in junior high?? So insecure and ****phobic...u know what they say about ...Lol!!! U win youngster!![/QUOTE] Naw! I called your bluff though chump. You was hating on Haymon and PBC when a Haymon fighter just beat the…