UNCASVILLE, Connecticut – Jermall Charlo was only slightly heavier than Sergiy Derevyanchenko, but his size advantage was evident as they stood several feet apart after weighing in Friday morning at Mohegan Sun.

Charlo (30-0, 22 KOs), who is less than a 2-1 favorite, will make the fourth defense of the WBC world middleweight title he won by knocking out Hugo Centeno Jr. (27-3-1, 14 KOs, 1 NC) in the second round of their April 2018 bout at Barclays Center in Brooklyn. Derevyanchenko (13-2, 10 KOs), the number one contender for Charlo’s championship, will fight for a middleweight title for the third time in less than two years. 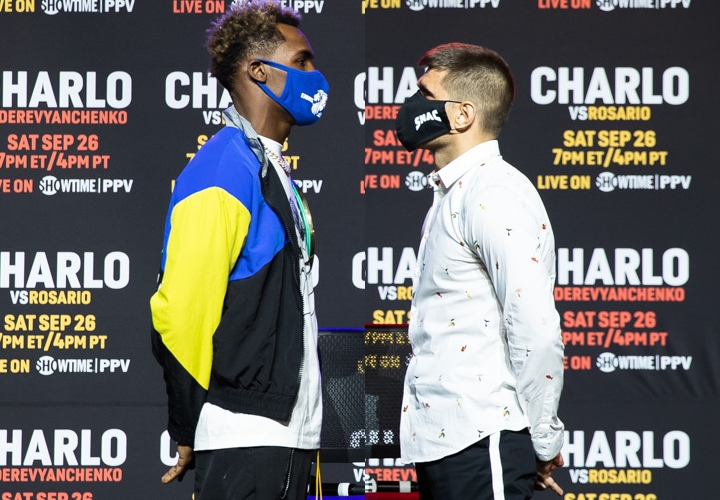 Derevyanchenko, 34, hasn’t fought in the nearly one year since losing his brutal battle against Gennadiy Golovkin by unanimous decision. Derevyanchenko overcame a flash knockdown during the first round and gave Golovkin (40-1-1, 35 KOs) the toughest fight of his career last October 5 at Madison Square Garden.

The Charlo-Derevyanchenko fight will be the first of two main events Showtime Pay-Per-View will televise Saturday night from Mohegan Sun Arena. Their 12-round, 160-pound championship match will headline the first of two three-bout blocks, which will begin at 7 p.m. ET/4 p.m. PT ($74.95).

The other four fighters who will box before Charlo and Derevyanchenko also made weight Friday morning.

Brandon Figueroa weighed in at exactly 122 pounds for his 12-round, 122-pound title defense against Damien Vazquez, who was 121½ pounds.

Vazquez is 1-1-1 in his past three fights, including an eight-round, unanimous-decision defeat to the Dominican Republic’s Juan Carlos Payano (21-3, 9 KOs) in March 2019.

The 31-year-old Casimero weighed 117¾ pounds for the first defense of the WBO 118-pound crown he won by knocking out South Africa’s Zolani Tete (28-4, 21 KOs) in the third round of his most recent appearance, November 30 at Arena Birmingham in Birmingham, England. The 27-year-old Micah officially weighed 117¼ pounds for the first title shot of his seven-year pro career.

The Casimero-Micah match will be the first of six fights Showtime will air Saturday night.