When he knocked out Julian Williams to end his 2016 campaign, it was easy to wonder if Jermall Charlo was on the verge of a monster run.

While he’s stayed active, Charlo hasn’t had the sort of opportunities and opponents at middleweight to allow him to do more than hold serve. Saturday night, in the main event of the first of consecutive three-fight cards (Showtime PPV, 7 PM EST), Charlo gets his biggest test in several years.

Charlo’s time is here with a win.

Sergey Derevyanchenko has had opportunities and seen them just slip by. A 2008 Olympian and 2007 bronze medalist at the World amatuer championships, Derevyanchenko was just a round or two away from upsets of Daniel Jacobs and Gennady Golovkin on the official cards. Is the third time the charm or does Charlo represent strike three? 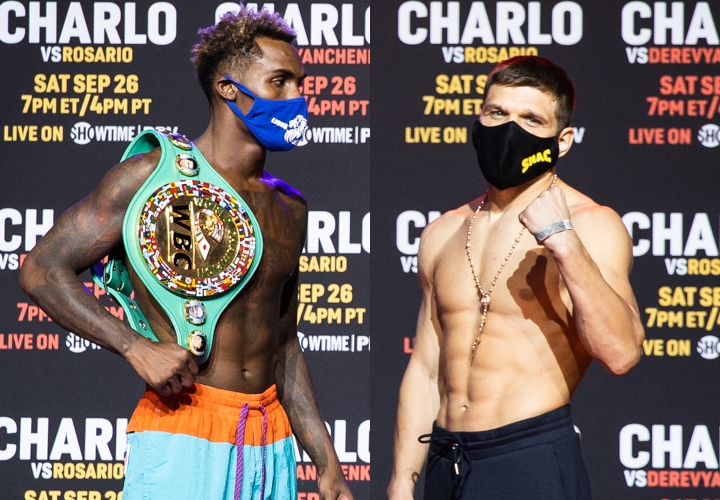 The Pick: As far as level of opposition goes, Derevyanchenko has the edge at middleweight. There were some who thought he deserved the win last year against Golovkin and he was in it with Jacobs all the way.

Being in it, being close, isn’t the same as winning. There are lessons in both defeats for the challenger in this fight and for Charlo. For Charlo the primary lesson of the Jacobs and Golovkin fights is Derevyanchenko gets better as the rounds go by, and catches better as well. If he can, like Golovkin and Jacobs, hurt Derevyanchenko early he should try to keep him hurt. If he cannot, Charlo should brace for battle.

The lesson for Derevyanchenko is to find a way to get warm without hitting the deck. The first round knockdowns in both those fights hurt him on the cards in fights where every point mattered. Being entertaining in defeat only has cache for so long. Eventually, it’s someone else’s turn. Derevyanchenko has to fight like, at 34, he can’t count on a fourth title shot.

No matter how hard he fights, Charlo’s greater height, reach, and speed may be too much to overcome. Charlo has an excellent jab and if he establishes it early he can create space to use his feet and prevent Derevyanchenko from setting his feet and dragging him into a dogfight. While Charlo can be measured and patient, when he has something to prove Charlo has an admirable killer instinct. The edgier version of Charlo could put on a show here.

It’s more likely we get a fight where both guys have to answer questions. Charlo has the potential for an explosive, early finish but suspect we see early drama and a settled, competitive middle before Charlo pulls ahead and secures a decision in a fan friendly affair.

Additional Picks for Showtime Card I