Jermall Charlo: My Toughest Fight Was Korobov On Date Jermell Got Robbed Of His Title

The last time that Jermall and Jermell Charlo shared a card, they were left with what both believe to be the toughest fights of their respective careers.

For Jermell, that December 2018 night resulted in the lone loss of his career—a highly questionable 12-round decision in favor of Tony Harrison to end his first junior middleweight title reign. The bout served as the chief support of the first Premier Boxing Champions (PBC) on Fox telecast since the two parties entered a lucrative, long-term deal.

Headlining the show was Jermell’s twin brother who by his own admission was initially shook by what took place ahead of his own fight.

“My toughest fight… I fought against [Matvey] Korobov on the date my brother actually got robbed of his title,” Jermall Charlo recalled during the most recent installment of Showtime Basketball’s All The Smoke podcast. “That was kind of one of my toughest fights, only because I was getting ready for a different southpaw (Willie Monroe Jr.).

"Then five days before the fight, he tested positive for steroids. So, they switched in this other guy that had been training and getting ready for me, on the fly. So, I had to go in there and make the best adjustments. At the same time, I had a lot going through my head." 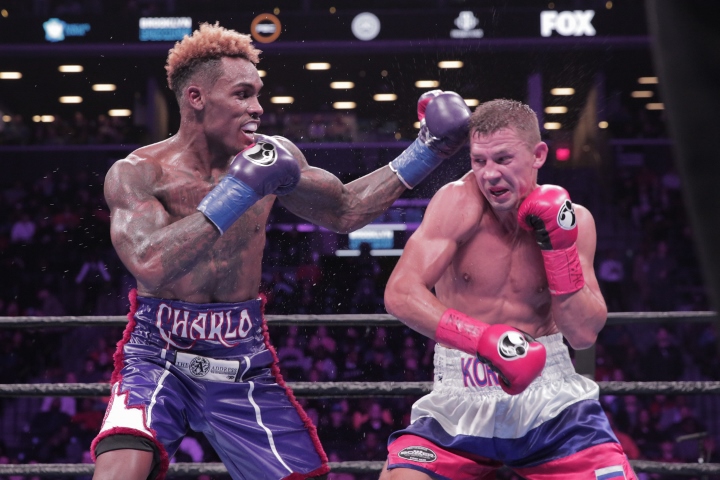 Jermall Charlo won the fight by 12-round unanimous decision, overcoming a sluggish start to dominate down the stretch. The fight marked the first defense of the WBC interim middleweight title he’d won earlier in the year, with the belt having since been upgraded to a genuine major title last June.

The night will mark the eighth time they share a card in the pro ranks and the first since they co-headlined the December 2018 PBC on Fox event. Prior to that show, the twins made history with Jermell’s come-from-behind knockout of John Jackson to win the WBC junior middleweight title. Jermall entered the night as the reigning IBF 154-pound titlist, with Jermell’s win marking just the first time in history where twin brothers simultaneously held major titles in the same weight division and just the third set of twins overall to enjoy overlapping title reigns regardless of weight.

It was a far more memorable occasion than their December 2018 reunion. That night resulted in the lone loss in the career of Jermell, who is 6-1 (3KOs) when sharing a card with Jermall. The defeat was obviously the worst fight of his career, even if most observers felt he deserved the nod.

The fact that the judges did him wrong didn’t at all sit well with either twin—and thus, having a rippling effect into big brother’s performance.

"I was like ‘Damn, they robbed my brother,"recalls Jermall, who is 7-0 (3KOs) on shows also featuring his younger twin by one minute. "They just trying to pull some scandalous sh-t.’ But it is what it is. It was one of my toughest fights. To the world, they actually thought it was a close fight because the guy landed some punches early on in the fight.

"I had to shake my head, get my head cleared. To see my brother lose for the first time ever in my life, that sh-t was kind of, it had messed with me mentally. I shook it off and then I went into destroyer [mode]."

[QUOTE=_Rexy_;20773482]That's why Charlo is running from the rematch right?[/QUOTE] He not running from nothing Harrison talked all that trash but won't give Charlo his props. Charlo knocked him out had him down in the early rounds and this dude STILL…

[QUOTE=satiev1;20772840]Korobov fight was the biggest robbery in the last 10 years. Jermall lost clearly.[/QUOTE] thought the fight was a robbery, the harrison vs charlo, lara vs canelo, and Marqez/Pac 3 fights were far worse. And there are others since 2010…

there were 2 robberies that night. Korobov was robbed in that fight as Jermell was I guess the judges didn't want both brothers losing, but I saw Korobov win that fight easily. Derevchenko is a live dog and if he's…

[QUOTE=Zodogg;20773470]He got KO revenge none better...WTF can Harrison say? If they fight again Charlo KO his azz sooner[/QUOTE] That's why Charlo is running from the rematch right?

[QUOTE=_Rexy_;20772224]No, you both lost that night.[/QUOTE] He got KO revenge none better...WTF can Harrison say? If they fight again Charlo KO his azz sooner