The unbeaten WBC world middleweight champion showed the Irish contender exactly what he meant Saturday night at Barclays Center in Brooklyn. The bigger, stronger Charlo dropped Hogan twice, once apiece in the fourth and seventh rounds, and stopped the game challenger in the seventh round of their scheduled 12-round, 160-pound title fight.

“[Trainer] Ronnie [Shields] told me to cut him off,” Charlo told Showtime’s Jim Gray regarding the punch that ended the fight. “I just threw the shot and I made sure I threw it right on the money.” 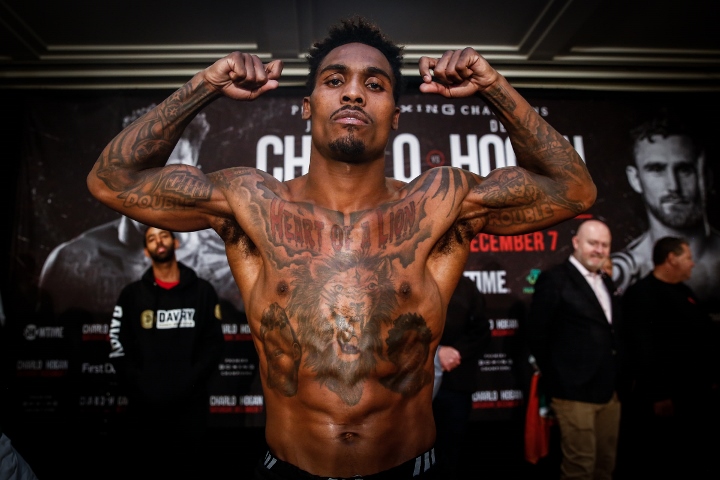 Prior to Saturday night, Hogan hadn’t been stopped inside the distance during an eight-year, 31-fight career. His first two losses were decision defeats to Jack Culcay and Munguia.

“I wanted to keep going, but the decision was fair enough by the referee,” said Hogan, who moved up from 154 pounds to 160 to challenge Charlo. “I didn’t see the punch coming on the second knockdown. I was trying to keep boxing him, but then, all of a sudden, I was on the ground and the fight was over.”

The 34-year-old Hogan (28-3-1, 7 KOs) landed a shot at Charlo’s championship due to his strong showing against Mexico’s Munguia in their 154-pound championship match April 13 in Monterrey, Mexico. Munguia (34-0, 27 KOs) won a majority decision in their 12-rounder and retained the WBO junior middleweight title he since has vacated, but the outcome was widely considered controversial.

He wasted no time hurting Hogan in the seventh round. Charlo’s left hook knocked Hogan to the seat of his trunks just 14 seconds into that three-minute period.

Hogan got up again, but Fitch determined he shouldn’t continue.

Hogan and Charlo wrestled and hit each other on the back of the head early in the sixth round. A right hand by Charlo snapped back Hogan’s head and made him retreat just after the halfway point of the sixth.

Charlo caught Hogan with several flush punches in the fifth round, but nothing that hurt the challenger as badly as the left hook that sent Hogan to the canvas in the previous round.

Charlo dropped Hogan with a short, left hook less than 30 seconds into the fourth round. Hogan rolled over after landing on his back and quickly got to his feet.

The crafty veteran moved and held his way to surviving the final two-plus minutes of that round. A jarring jab by Charlo made Hogan stumble with just under a minute to go in the third round.

Hogan caught Charlo with a counter left hook when there was just under a minute to go in the first round. Hogan landed another left hand that backed up Charlo with about 15 seconds left in the opening round.

[QUOTE=revelated;20242959]Quality knockdown. Though I wonder how much of that was foot placement.[/QUOTE] Sign of a quality boxer, once Charlo worked out Hogan's off rhythm style it was just a matter of time.

[QUOTE=Richard G;20241578]Rush in like you've been doing all fight, not predictable much, and run into a short left. Duh. Apparently Rushton his coach and pretend corner man had been telling Hogan that he was getting on top and that Charlo…

[QUOTE=1hourRun;20240037][img]https://i.imgur.com/q6is7vR.gif[/img][/QUOTE] Rush in like you've been doing all fight, not predictable much, and run into a short left. Duh. Apparently Rushton his coach and pretend corner man had been telling Hogan that he was getting on top and that Charlo…

[QUOTE=Pan-Africanist;20238944]Hogan wasn’t a bum. Not champion material but he knew how to handle himself. He’s the kind of fighter Charlo should’ve beaten 4 years ago. Not in a title defense in 2019.[B] I agree Charlo needs to step up the…