Jermall Charlo: Derevyanchenko Is Looking Past Me; He'll Find Out Saturday

The unbeaten Houston native also is the slight betting favorite and the obvious “A” side of his fight Saturday night against Sergiy Derevyanchenko. Charlo still contends that his opponent is overlooking him as they approach their 12-round, 160-pound championship match at Mohegan Sun Arena.

Even though Charlo is the champion, Derevyanchenko has been tested more as a middleweight than Charlo. The Ukrainian contender’s two defeats came in highly competitive, 12-round fights for the IBF middleweight title – a split decision to Daniel Jacobs in October 2018 and a close unanimous decision to Gennadiy Golovkin 11 months later in a brutal battle BoxingScene.com named its “Fight of the Year” for 2019. 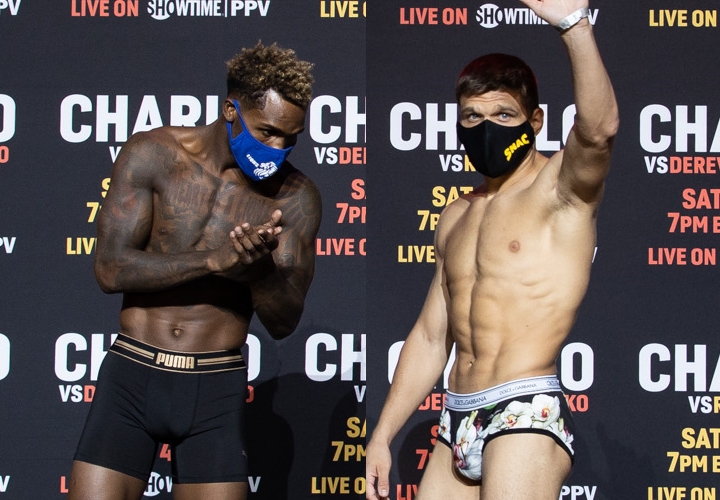 The 34-year-old Derevyanchenko (13-2, 10 KOs) is convinced his third title shot will be the charm. Charlo (30-0, 22 KOs) envisions a victory over Derevyanchenko becoming the first of numerous impressive wins within the 160-pound division.

“This is just the beginning,” Charlo said. “Thirty of them have tried, 30 of them have failed. We’ll get a chance to get in there and do what we’ve gotta do on Saturday. Talk is cheap. … We’ll see where the green belt go.”

Charlo alluded to Derevyanchenko stating that the WBC’s green belt suits him earlier in the press conference.

Though an underdog, Derevyanchenko is the most accomplished opponent Charlo has agreed to fight since he moved up from the junior middleweight division after his fifth-round knockout of Julian Williams in December 2016. Since moving up from 154 pounds to 160, Charlo has beaten Jorge Sebastian Heiland, Hugo Centeno Jr., Matt Korobov, Brandon Adams and Dennis Hogan.

Other than the Korobov bout, none of Charlo’s five middleweight matches were competitive. Charlo feels underappreciated, but he thinks defeating Derevyanchenko will earn him some of the credit he deserves.

“I’m the best in the world,” Charlo said. “And Saturday, you guys will get a chance to see it.”

The second main event of this six-fight show will feature Jermall’s twin brother, Jermell Charlo, and Jeison Rosario. Jermell Charlo (33-1, 17 KOs) and the Dominican Republic’s Rosario (20-1-1, 14 KOs) will meet in a 12-round, 154-pound title unification fight for Charlo’s WBC belt and Rosario’s IBF and WBA titles.

I am expecting a boxing clinic performance from Derevyanchenko.

Lol...Keith Idec is straight trash. Real shill for hire ish. Looking forward to the Charlo doubleheader. You can splice together pics but you can’t stop the money or interest in great matchups. Something DAZN can’t find to save its business…

[QUOTE=Thraxox;20779219]Charlo was probably like "Well ****, if I can't beat him in size, I'll beat him in the ring!" Gotta change my prediction from Derev U.D to Charlo TKO, no man would let an another man get the best of…