On Showtime Pay-Per-View from the Mohegan Sun, Jermall Charlo defended his WBC middleweight world title for the third time and improved to 6-0 at 160 pounds with a skilled and disciplined unanimous decision victory over Sergiy Derevyanchenko.

"We stood toe-to-toe and we didn't back down from anything,” said Charlo, who had renowned trainer Ronnie Shields in his corner.

“It was supposed to be one of the hardest fights of my career and we passed the test. He had a puncher's chance, and of course the fight could have changed at any moment. I listened to my corner and executed the game plan and got the win.” 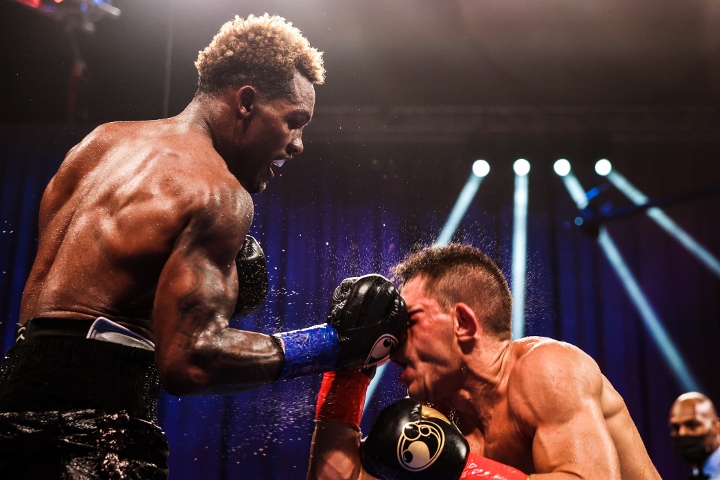 The 34-year-old Derevyanchenko (13-3, 10 KOs) fought more than half the fight with a swollen right eye he suffered in the fifth round, and later developed another cut above his left eye affecting his vision in the later rounds.

He had his best rounds in the sixth and seventh as he connected on a several key left hooks that seemed to daze Charlo. The game and determined Derevyanchenko landed 180 and threw 681 more punches than any previous Charlo opponent.

"I wouldn't say it was an easy fight, but we stuck to what we wanted to do and made it happen,” Jermall said.

“I let my jab dictate and we got the victory. I wanted to knock him out, but you can't knock everyone out. I'm a finisher, but you don't want to run into anything even though you have him hurt. I landed the shots that I needed to in order to win.

"The whole world understands that I can fight in there with the best of them. He gave GGG [Gennadiy Golovkin] a harder test than he gave me so I think the levels showed. I'm the best middleweight in the world.”

Golovkin's chasing Canelo and avoiding any competition because he's old and compromised...the same way Khan has done over the past 6-7 years. I get it. GGG's simply not a factor anymore and the luster's gone. Jermall finishes him if the…

Not sure his stock value increased. He still sits about where most had him before the fight. All this proved was that he deserves a spot at the top 5 of the division. He passed his first real test at…

[QUOTE=Boxingfanatic75;20782624]No, I never said that. He’s a tough tough fighter but he isn’t elite. Everyone here knows HHH lost to a non elite fighter in Dervy and got his a@@ busted by him. [B]He also lost to Jacobs.[/B] It’s obvious…

[QUOTE=ecuasionz;20782992]GGG and Charlo are the exact same size. Let's not get carried away now.[/QUOTE] Ah right, so Golovkin has grown two inches taller and his arms three inches longer in the past year? Talk about getting carried away :lol1: