UNCASVILLE, Connecticut – Jermall Charlo accomplished something Saturday night that neither Gennadiy Golovkin nor Daniel Jacobs could do.

The taller, stronger Charlo clocked Derevyanchenko with various power shots, controlled a lot of the action with his jarring jab, nearly dropped Derevyanchenko toward the end of the third round, displayed a granite chin and beat his number one contender more convincingly than Golovkin or Jacobs. The relentless, rugged Ukrainian contender took Charlo’s hardest punches, though, and rarely stopped coming forward, despite cuts above both eyes and severe swelling surrounding his left eye.

“We fought just like they wanted to see us fight,” Charlo said during a post-fight press conference. “We stood toe-to-toe, we didn’t back down from nothing. It was supposed to be one of the hardest fights of my career, and we passed the test.”

The disciplined Charlo’s performance undoubtedly was his most impressive since he moved up to the middleweight division 3½ years ago. Before facing Derevyanchenko, the 30-year-old Charlo had been criticized for his level of opposition since he relinquished the IBF junior middleweight title to compete at the 160-pound limit.

Houston’s Charlo (31-0, 22 KOs), who was less than a 2-1 favorite, made the fourth defense of the WBC world middleweight title he won by knocking out Hugo Centeno Jr. (27-3-1, 14 KOs, 1 NC) in the second round of their April 2018 bout at Barclays Center in Brooklyn. The 34-year-old Derevyanchenko (13-3, 10 KOs) slipped to 0-3 in middleweight title fights, but Charlo commended his durable opponent’s toughness.

“He was a fighter,” Charlo said. “We gave him a puncher’s chance, so at any moment the fight could change. But I stuck to my game plan, I listened to my corner and we executed the game plan well. We got done with the fight with an A, you know?”

Nevertheless, the judges didn’t view Derevyanchenko’s performance against Charlo the same way they did when he boxed Jacobs and Golovkin. 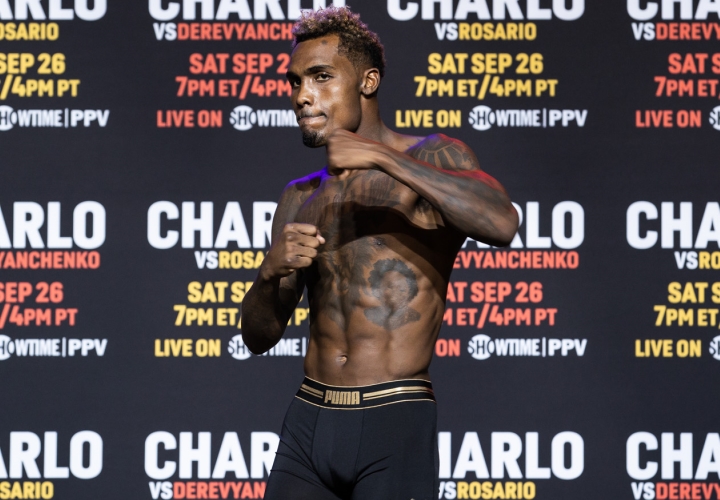 The vacant IBF middleweight title was at stake in each of those defeats.

“Sort of, it was easy,” Charlo said. “I don’t wanna call him like an easy fight. No fight is easy. It’s always a hard fight, you know. Like I said, at any given time, anything can change. But like I said, we stuck to the game plan and we made it happen. I let my jab dictate and do what it do, and we got the victory. I wanted to knock him out, if that’s what you wanna know. I wanted to knock him out, but you can’t knock out every fighter. He was there to survive. He was a tactical survivor. But on to the next one. You know what I mean?”

Battered and bloodied, Derevyanchenko never stopped trying to hurt Charlo in the 12th round. Charlo displayed a tremendous chin

Derevyanchenko caught Charlo with a right hand early in the 11th round, but Charlo didn’t budge. Charlo nailed Derevyanchenko with a jarring jab after the midway mark of the 11th.

Charlo connected with a right to the side of Derevyanchenko’s head with just over 30 seconds to go in the 11th round.

Derevyanchenko pressured Charlo at times during the 10th round, but Charlo took his punches well and caught the game challenger with several hard right hands in that round.

Charlo rocked Derevyanchenko toward the end of the eighth with a straight right hand that made him retreat until the round ended.

Charlo clipped Derevyanchenko with a left hook just before the seventh round ended.

Charlo hit Derevyanchenko with a right hand after the bell sounded to end the sixth round.

Charlo also opened a cut over Derevyanchenko’s right eye when he landed a left hook during the fifth round.

Derevyanchenko came out firing to start the fourth round, after Charlo almost dropped him toward the end of the third round. Derevyanchenko tried to find his way inside against the taller, longer Charlo, but Charlo often made him pay.

Charlo connected with a right uppercut when there were about 25 seconds to go in that fourth round.

Charlo landed two right hands in the opening minute of the third round that got Derevyanchenko’s attention. Charlo clipped Derevyanchenko with a left hook as they traded inside later in the third.

Charlo wobbled Derevyanchenko with a right hand that landed on the top of Derevyanchenko’s head just before the third round ended. Derevyanchenko went into a squatting position after taking that punch, moved backward and held Charlo to make it to the end of the round.

“I’m a finisher,” Charlo said. “That happened almost like the last 10 seconds of the round, so he made it through the round. He came back a little bit more recovered, but we figured if we continued to put pressure – but you don’t wanna know run into nothing just because you’ve got a fighter hurt. You wanna continue to, you know, box and use your athleticism. And I stuck to the game plan, even though I had him hurt. If [trainer] Ronnie [Shields] would’ve told me to go out there and see if he’s still hurt, then I would’ve tested him. But I landed the shots that I needed to land to win.”

Derevyanchenko landed a right hand with about 1:15 to go in the first round. Charlo connected with a stiff jab with about 45 seconds remaining in the opening round.

[QUOTE=Boxing-1013;20783335]Sorry but you have no credibility if you don't think GGG clearly won both Canelo fights. [/QUOTE] Lol. Seriously dude stfu. Saying hom0sexual things as such should be a ban mayne!

[QUOTE=Shadoww702;20785131]I get ppl judge different styles. Some prefer aggressive boxers. Other slick defense. And other a lil both. But hes not consistent at all except in he doesn't like Canelo and will suk GGGood dic and ask for seconds. He…

[QUOTE=Boxing-1013;20785707]Really? I thought Charlo snagged rounds 7 and 8 and clearly took round 9. But I felt Derevy pretty clearly ended the fight better and took the last 3.[/QUOTE] To each his own. I rarely agree with the judges scorecards…

[QUOTE=Boxing-1013;20785705]I saw GGG outwork Canelo almost every round in both fights. I have watched both fights many times and I have yet to find one round where Canelo outlanded GGG by a few punches, and landed the best shot or…

[QUOTE=koolkc107;20785102]Yeah, I am not on here enough to spend time going back and forth with someone who thinks using their "feelings" is a legit way to score fights. I made a statement anyone with a 5th grade and above education…