Jeison Rosario Released From Hospital, Returns To The Dominican Republic

Jeison Rosario felt dizzy and nauseous after Jermell Charlo stopped him with a jab to the body early in the eighth round of their 154-pound title unification fight at Mohegan Sun Arena. Rosario got the wind knocked out of him and his body convulsed after he fell flat on his back.

He eventually attempted to get up, but he fell into the ropes. That’s when referee Harvey Dock stopped their scheduled 12-round fight 21 seconds into the eighth round. 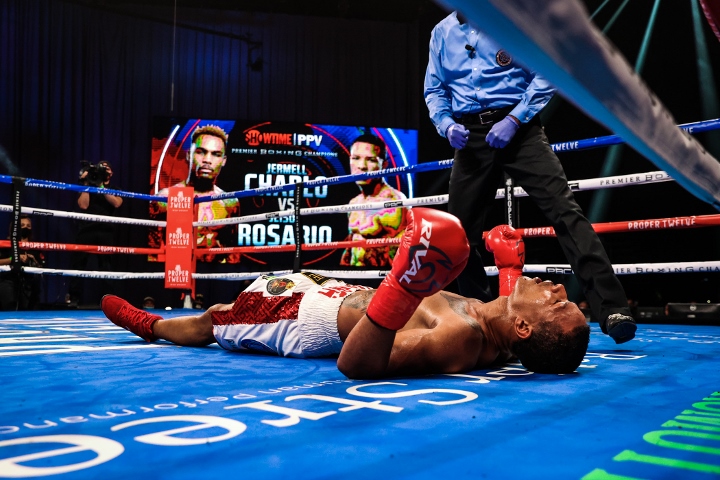 The former IBF/WBA champion had a difficult time simply standing up after suffering that third knockdown and had to be helped from the ring to his dressing room.

Rosario, 25, was transported by ambulance to a nearby hospital, where he underwent an MRI, EKG and other tests. Doctors didn’t detect anything wrong with him and released Rosario on Sunday morning, which enabled him to fly home to the Dominican Republic.

“He is OK, thank God,” Lewkowicz told BoxingScene.com. “The way he went down from that punch, and how he was convulsing on the canvas, it was scary to see that. It was a very tough fight. But he is OK. That is the most important thing.”

Charlo’s left hand grazed the top of Rosario’s head, which knocked him off balance and down to the canvas less than a minute into the opening round. A left hook by Charlo caught Rosario flush, hurt him badly and sent him down again, this time with a few seconds to go in the sixth round.

Rosario recovered during a seventh round in which he didn’t throw many punches. When Charlo connected with what seemed like a jab to the body to set up another punch early in the eighth round, however, Rosario went down for the third time and was unable to continue.

Flukes reveal themselves in the oddest ways.

That was the weirdest KO I've ever seen.

Jeez. You'd think they never had the breath knocked out of them, or seen such. Not really "convulsing" as much as just gasping to get the breathing started back. That's just "how it works".

[QUOTE=PBR Streetgang;20783049]Indeed, the way he responded to his corner and jumped off his stool seemed "off" to me. Charlo hits hard and Jeison's punch resistance isn't the best. There was no dive, it's an insult to say that. The body…

[QUOTE=Bigchip;20783038]It’s called life-altering money to take that dive. I’m not mat at you Banana. You aren’t even 25 and you took the payoff. Coming from where you do, that’s big time bread![/QUOTE] Stupid comment man. And I don't mean to…