The rugged Rosario, a huge underdog, stunningly knocked out Williams in the fifth round of their scheduled 12-round, 154-pound championship match in Williams’ hometown. Most Internet sports books listed Williams as at least a 30-1 favorite entering a main event FOX televised from Temple University’s Liacouras Center.

You wouldn’t have known it by the way the unknown, unfazed Rosario ran through Williams before his hometown crowd.

A right-left combination by Rosario was the beginning of the end for Williams in the center of the ring in the fifth round. After landing that combination, Rosario jumped on a wobbled Williams and unloaded a barrage of power punches that hurt the former champion badly.

Williams tried his best to hold Rosario, but eventually Williams went to the canvas. Referee Benjy Esteves ruled, however, that Rosario shoved Williams down.

A disoriented Williams eventually got up, but he couldn’t fend off the hard-hitting, hungry underdog.

The 24-year-old Rosario quickly drilled a bloodied, battered Williams with a vicious right uppercut and a left hook that left Williams slumped against the ropes. Esteves understandably jumped between them then and stopped their fight at 1:37 of the fifth round.

The Dominican Republic’s Rosario (20-1-1, 14 KOs) won the IBF, IBO and WBA 154-pound championships from Williams (27-2-1, 16 KOs, 1 NC), who defended those titles for the first time in his first fight in Philadelphia in more than eight years. Williams fought for the first time since his 12-round, unanimous-decision upset of Jarrett Hurd, who was a 6-1 favorite entering their May 11 bout in Fairfax, Virginia, near Hurd’s hometown.

“I’m so emotional in this moment right now,” Rosario told FOX’s Heidi Androl in the ring through a translator. “When I lost my last fight, I said I will never lose again until I become champion of the world, and that’s what happened tonight. I came prepared. I knew before the fight I was going to win it.” 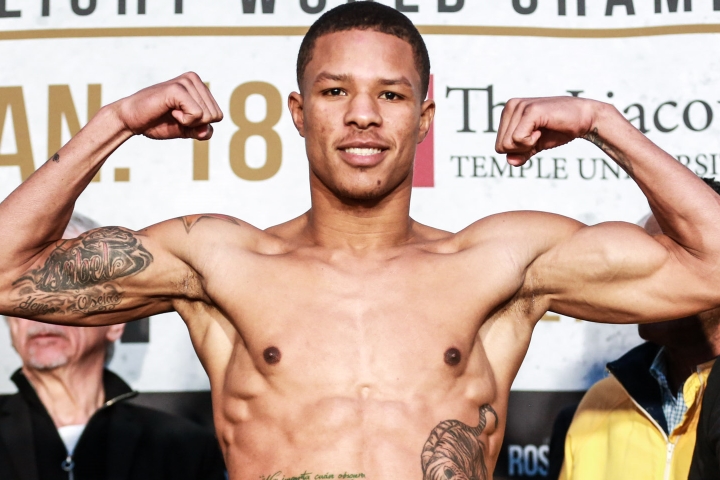 Rosario suffered his lone loss to Nathaniel Gallimore, who dropped Rosario three times and stopped him in the sixth round of their April 2017 fight in Las Vegas. Williams beat Gallimore by majority decision in their 12-rounder the following April in Las Vegas.

Williams, meanwhile, suffered the second knockout loss of his career. Jermall Charlo knocked out Williams in the fifth round of their fight for Charlo’s IBF junior middleweight title three years ago in Los Angeles.

“I wasn’t surprised [Rosario] was so good,” said Williams, who plans to exercise his rematch clause. “I told everybody he’s a real fighter. I have to accept it. The cut blurred my vision a bit, but it wasn’t the reason why I lost. He was the better fighter tonight. We’ve got a rematch clause. I’ll see him again soon. I’ll be back.”

Rosario was ahead by the same score, 39-37, on the cards of judges Julie Lederman and Dave Braslow entering the fifth round. Judge Kevin Morgan had their fight even through four rounds (38-38).

Before that fateful fifth round Saturday night, Rosario nailed Williams with a counter right hand after Williams missed with a right uppercut just after the halfway point of the fourth round.

A short right hand by Williams caught Rosario about 1:10 into the third round. Williams got good extension and landed an even flusher right hand later in the third.

Williams tried to attack Rosario’s body with just over a minute to go in the second round, but Rosario defended himself well. A short right hand by Rosario connected on Williams with about 25 seconds remaining in the second round.

By then, Williams had already suffered a significant cut on his left eyelid. Esteves ruled that cut was caused by a punch.

Williams landed a short right hand about 30 seconds into their fight. Williams worked off his jab for much of the remainder of the opening round.

Four rounds later, Rosario had pulled off an enormous upset and completely changed his life. Rosario attributed his success Saturday night to three months of intense preparation in Miami, the first “real training camp” of his career.

“I would have started doing training camps a little earlier if I had known these were going to be the results,” Rosario said. “Thanks to Philadelphia and to Julian Williams. Without this opportunity, I wouldn’t be champion today.”