Jeff Horn: This is The Fight That Will Silence All The Critics

Glenn Rushton says the same thing to Jeff Horn just before it’s time for them to make the walk to the ring for the next battle.

“We're here because we want to be here. No one's forcing us to do this. We want to do this. Let's get up here and entertain these people. We're living the dream.”

It has been a dream-like scenario for the pair since July of last year, when Horn stunned the boxing world with an upset decision victory over future hall of famer Manny Pacquiao. As soon as the verdict was read, the Brisbane product was the toast of the town down under, whisked away to award shows and charity events as he was celebrated for producing one of his nation’s biggest wins in years.

“It's been an absolute whirlwind,” said Horn. “The last year, to be honest, has completely changed my life. I would never say I'd return back to the way it was, because life is awesome at the moment.”

Still unbeaten, still the WBO welterweight champion, the 30-year-old Horn may never experience the emotional high of beating Pacquiao again, but this Saturday in Las Vegas, he may very well be engaging in the most important fight of his career when he faces Terence Crawford at the MGM Grand. Like the Pacquiao fight, Horn is the underdog, the fighter expected to be a stepping stone for the Nebraskan. But Horn and Rushton have not made the horrifically long trip from Australia to the U.S. to lose.

“Bottom line, we're ready,” said Rushton. “We're ready to do battle against anybody, and as I've always said to Jeff, 'Jeff, you can beat them all. As long as you prepare well, you can beat them all.’ He's tough enough, he's skillful enough, and he's strong enough. He's competitive, he's got a great chin and he hits incredibly hard. He's got all the attributes necessary to win this fight. After all, he (Crawford) is just a man. He's not a God, Crawford. He's just a man.”

There are some in the boxing community who would debate that statement, as the 30-year-old Crawford has been dazzling on his way up the pound-for-pound list, earning accolades on top of accolades as he tore through the lightweight and junior welterweight divisions, unifying the 140-pound titles with a blistering knockout of Julius Indongo last August. This weekend, he chases welterweight gold against a gritty competitor who heard all the naysayers before he brought a 16-0-1 record into his fight with Pacquiao at Suncorp Stadium in Brisbane.

“I told Manny, ‘This is gonna be a war,’” recalled Rushton. “In fact, the day before, I said, ‘Tomorrow is gonna be Sunday, bloody Sunday. I hope you're ready.’ He just smiled at me and I thought, 'He doesn't get it. He doesn't understand how tough a fight this is gonna be.’ But at the end of the first round, he walked back and he smiled and he looked at Jeff, and I said, ‘He knows. Now he respects us.’ It was certainly a change of attitude and I think that respect grew as the fight went on.” 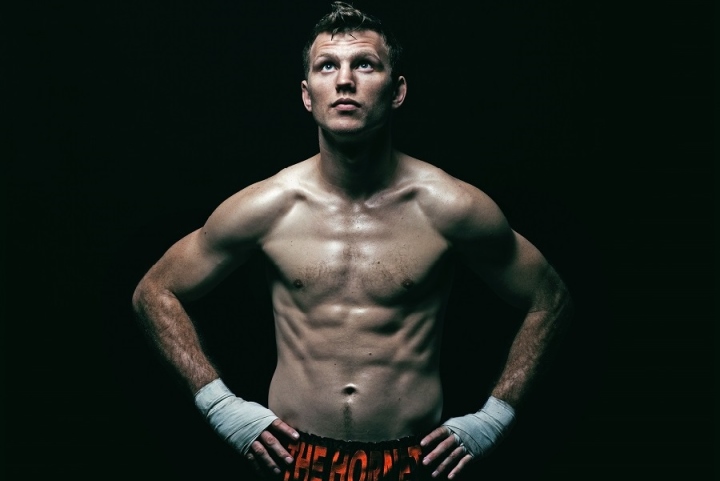 In Pacquiao’s face for most of the 12 rounds, Horn shook off a rough ninth round and took the fight to the Filipino icon, earning the decision by scores of 115-113 twice and 117-111. The verdict drew outrage from various quarters, even prompting a re-scoring of the bout by the WBO. Horn was deemed worthy of the decision and he moved on. Rushton wasn’t so forgiving.

“People always make excuses,” he said. “At the end of the Pacquiao fight, I stood in the ring and I looked in the eyes of a warrior who accepted the defeat. Unfortunately a week later, I heard the rantings of a politician. We won the fight fair and square, and all we can do is keep delivering. We can't determine how the public views the fight. We'll fight for what we've got control over, and that's trying to carry ourselves with distinction outside the ring and in the ring we'll be warriors.”

An immediate rematch was expected, but Pacquiao went in a different direction, leaving Horn to finish out the biggest year of his career with an 11th-round stoppage of Gary Corcoran. It was an important fight, not just for the payday, but to prove that Horn wasn’t being distracted by everything swirling around him.

“Look, it was difficult because it felt like it happened pretty quickly after the Pacquiao fight, but I knew I had to get another fight in before the end of the year,” Horn said. “I was a very active fighter before that, and it was only two fights last year, so I had to make sure I keep the rhythm going and try to keep fighting.”

And while Corcoran was a tough out, being in a dogfight and surviving some adversity to get there only enhanced the worldwide reputation of “The Hornet.”

“It was a really important fight,” said Rushton. “We had a lot of commitments after the Pacquiao fight, an awful lot of events to attend. It was just full-on, coping with all the events after the Pacquiao fight, and Corcoran come out here to fight. He's a very tough guy - big, strong - and we knew it would be a really tough fight. Unfortunately, we also sustained a bad injury three weeks out when Jeff got split right in the middle of the forehead and had to get eight stitches, so we missed three weeks of valuable sparring. It was tough, but I always knew we'd get the job done and when I asked Jeff to push the button, I said, 'Jeff, let's finish this,' he pushed the button and got it done.”

The 11th round stoppage was Horn’s 12th knockout in 18 wins against no losses and one draw. It’s an impressive slate for sure, but the 30-year-old still seems to be fighting for recognition. That fight could be over by Sunday morning.

“This is the fight that will silence all the critics,” Horn said. “He (Crawford) is a great fighter and he's ranked pound-for-pound number one, so if I can beat him then there should be no argument that I've proved myself.”

So can he do it? The general consensus is that Crawford is too fast, too accurate and too good for the Aussie. But what Crawford likes more than anything is getting into a fight, and if Horn can entice “Bud” into a brawl, well, that’s where he’s at his best. But Horn doesn’t believe that’s his only path to victory.

“I feel like I can box reasonably well as well,” he said. “I might not make it look as pretty as Crawford does, but I can still box. And if I need to make it a brawl, I'll make it a brawl - within the rules, of course.”

He laughs, at ease before the big day and already acclimated to the States after coming in last week. Remember, Horn has been here before, and by the time he left the ring, he silenced a lot of naysayers. He plans on doing it again, and if Horn is excited about that prospect, Rushton is even more so.

“I think when we get out there, by the end of the first round, Terence Crawford will go, 'Hell, this guy's a lot better than I thought he was.'”

[QUOTE=BoZz;18847784]how are ya matey...where's ya mate jeffo? :lol1:[/QUOTE] splendid performance from Bud the better man won really enjoyed the fight.

[QUOTE=Stevil1;18840836]Crawford is gunna get knocked out big time Horn has 2 big cannons ready to knock his skinny punk ass out of the ring !![/QUOTE] Good call champ.:rofl: