Former world champion Jeff Horn was getting himself ready for a major confrontation next month.

Horn was scheduled to face undefeated rising star Tim Tszyu, in what was being billed as one of the biggest collisions in Australian boxing history, but their fight was pushed back when the coronavirus pandemic began to escalate.

Now Horn finds himself isolated at his Brisbane home with his wife and two daughters, waiting for his country to get back to normal. 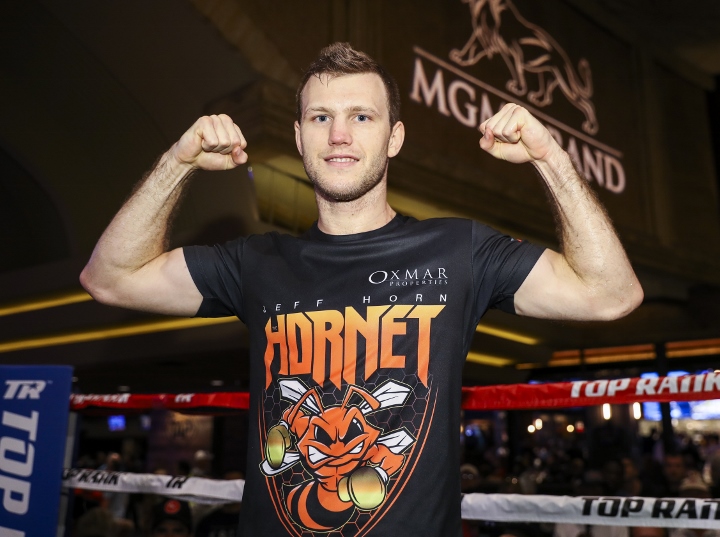 Horn, a former schoolteacher, trying to keep his weight in check as he waits for his promoter to inform him of the new date for the fight with Tszyu.

The contest was originally scheduled for April 22 at the brand new Queensland Country Bank Stadium in Townsville.

“Food comes into the mind as an excitement at times like this when you have nothing else to do but I really need to try as hard as I cannot to think about that,” Horn told Main Event Boxing podcast’s host Ben Damon.

“I’m probably one of those people that’s really going to struggle at this point in time. If I put too much (weight) on it’s going to be absolute hell and I won’t be able to get ready in the time frame of eight weeks.

“(I’m) trying to support the businesses as well that might be going under from all this havoc that’s happening - if I can find healthy options on the outside at restaurants I’ll definitely be trying to do that.”

Because of the pandemic, it's derailed Horn's ability to stay in shape with head trainer Glenn Rushton.

“That’s a tough one. I was talking to Glenn about that today. I don’t have a bag at home and basically I’m not going to Glenn’s at the moment so none of that’s happening and the social distancing rule with the padwork - that shouldn’t be happening - so not much boxing has been happening and I don’t know how long until I do start.

“Once sport starts back up again, people are going to be dying to see something. Everyone will be glued to television screens watching sports or going to venues to watch sports that they haven’t been able to watch for a very long time. I’ve fought in front of big crowds like that and it does lift you to another level and Tim will experience that as well so I know I’m going to get the very, very best Tim Tszyu when I do fight him.”

[QUOTE=Richard G;20484187]Sometimes Horn's missus eats too much of her own cooking I think LOL.[/QUOTE] Yeah, just like Bradley's wife

[QUOTE=revelated;20483760]Most definitely favors Tszyu. Younger, metabolism hasn't slowed down, etc. Plus Horn has a full family with a wife that loves to cook.[/QUOTE] Sometimes Horn's missus eats too much of her own cooking I think LOL.

[QUOTE=Richard G;20482748]So no more pizza? The delay will favour Tszyu who seems to be more able at keeping his weight in check.[/QUOTE] Most definitely favors Tszyu. Younger, metabolism hasn't slowed down, etc. Plus Horn has a full family with a…

Careful Jeff Horn, I know is difficult without boxing equipment and the motivation, but you have to be strong to not cheat meals and maintaining doing all the exercise you know to stay in shape. I am on this one…