Jeff Horn: It Will Be Hard To Continue if I Lose To Mundine

Jeff Horn admits his boxing career may be over if he loses his November 30 comeback fight to a retirement-bound Anthony Mundine.

But the former world champion has cast doubt over whether their 71kg catchweight bout at Suncorp Stadium will be the last time fans see the controversial Mundine.

Mundine, 43, insisted the fight would be his last, bringing an end to his 18-year boxing journey. 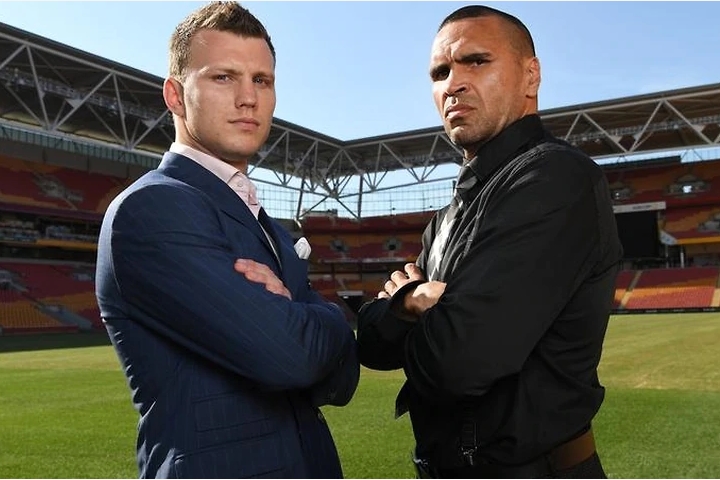 "He had a cheeky comment to me just before saying it wasn't his last ... but we will see what happens on the night," Horn said, after coming face to face with Mundine at a pre-fight Brisbane press conference.

Horn is hoping to use the Mundine bout as a stepping stone toward a re-match with the man who took his WBO world welterweight title in June - American Terence Crawford.

He will be overwhelming crowd favourite against Mundine at the venue where Horn pulled off his stunning WBO title win over boxing great Manny Pacquiao in July 2017.

But former teacher Horn admitted a loss to Mundine would be disastrous for his future.

"It would definitely be very hard to pick up the career if I have another loss - time will tell," said Horn (18-1-1 record) said.

"But I think I am a better mover than Mundine.

"I think I will overwhelm him.

"I can keep going at a pace I don't think he will be able to withstand."

Horn said he would need to make a statement against Mundine if he was to again be taken seriously as a title contender.

"Mundine's been the biggest name in Australian boxing for a long time now," Horn said.

"I need to make sure it looks easy, try as hard as I can to get a convincing win."

Horn is absolutely correct with his statement. If he loses to Mundine that's his career over and unless he gets a Msnny re-match he won't have away in terms decent money. He's already done ok for himself considering what a…

[QUOTE=Tatabanya;19182523]Possibly two of the most useless fighters ever lived. One of them being a rare example of human specimen knocked out by Sven Ottke.[/QUOTE] Lmao Sven Julian Jackson Ottke, Mundine was talented though and he did great getting to contender…

154lb is too low for Mundine who was a fairly strong 168lber to start and even that was lighter than his natural rugby weight He looked sick and weak at 154 , even 160 too low imo unless he has…

[QUOTE=AdonisCreed;19182721]This guy talks allot of sh** it's funny some days and other days it's annoying :([/QUOTE] bro you don't anything about the guy, he's quiet as f*** and just goes about his business all he ever did was believe in…