MTK Global is delighted to announce a return to the Ulster Hall in Belfast for a huge #MTKFightNight featuring a high-stakes flyweight showdown between Jay Harris and three-time Irish Olympian Paddy Barnes.

The bill will take place on October 11 live on ESPN+ in association with Top Rank. This is the latest world-class card to take place at the venue after three action-packed MTK Fight Night events at the Ulster Hall earlier this year.

Unbeaten Harris (16-0, 8 KOs) picked up the biggest win of his career back in June, where he defeated world title challenger Angel Moreno to win the European flyweight title, and he wants to build on that momentum. 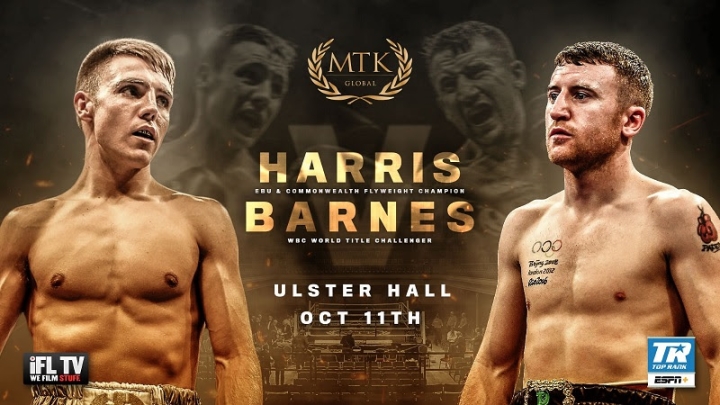 Harris said: “I’m really excited to be fighting Paddy Barnes. I think our styles will make one hell of a fight. I’m especially really looking forward to it after seeing the last Belfast show because the atmosphere was amazing and I can’t wait for it

“These are the types of fights I want to be In and to show what I’m about. It’s great to be live on a brilliant platform like ESPN+ again as well because it’s another chance to build a fan base in the USA and showcase my ability.”

Barnes (6-2, 1 KO) returned to winning ways in style earlier this month with a dominant victory over Joel Sanchez on the huge Feile an Phobail event at Falls Park, and he’s thrilled to be taking on Harris.

Barnes said: “I can’t wait for this fight. It will be a great exciting bout because Harris is an aggressive fighter like myself so I already know he will be in my face and I wont have to go looking for him which suits me.

“It is good it’s in Belfast as the fans wont have to travel far, but we are both experienced fighters so it doesn’t matter where it is. It’s going to be a brilliant fight.

“After I fought on ESPN+ in New York, even though I lost, I gained a few thousand American fans as they loved watching me fight. They would message me asking me when I’m fighting next, so I’m sure they will tune in again.”

Promoter Lee Eaton added: “We’re delighted to be returning to the Ulster Hall in Belfast for another fantastic show. The Belfast fans are amazing and they always make our events ones to remember.

“So far this year at the Ulster Hall we’ve seen the incredible Fight of the Year between Steven Ward and Liam Conroy, the return of former world champion Ryan Burnett, and the fantastic battle between Luke Keeler and Conrad Cummings.

“We also saw how incredible the Belfast fans are at our recent sold out Feile an Phobail event, and we’re expecting another brilliant event in October.

“Jay Harris vs. Paddy Barnes is a superb fight with big rewards on offer to the winner, and there will be even more great fights announced.”

I liked Barnes as an amateur but the pro game ain't for him, he's shopworn at this point.

What happened to the Harris/Selby fight?

barnes has even worse power than malignaggi p4p.

Excellent news. I've wanted to go to Ulster Hall for some time. Barnes is getting hurt here though. Harris inside 12.