In a blink of an eye, welterweight prospect Angel Ruiz suffered his first loss of his career in spectacular fashion.

Javier Flores scored a highlight-reel knockout victory Friday night over Ruiz at the Doubletree Hotel in Ontario, California. With the victory, Flores improves to 15-2, 13 knockouts.

Ruiz entered the fight as the favorite after demolishing his opposition as of late. In his last bout on June 14, Ruiz knocked out gatekeeper Miguel Zamudio in the opening round. Flores was considered a decent test after having split his last four fights. 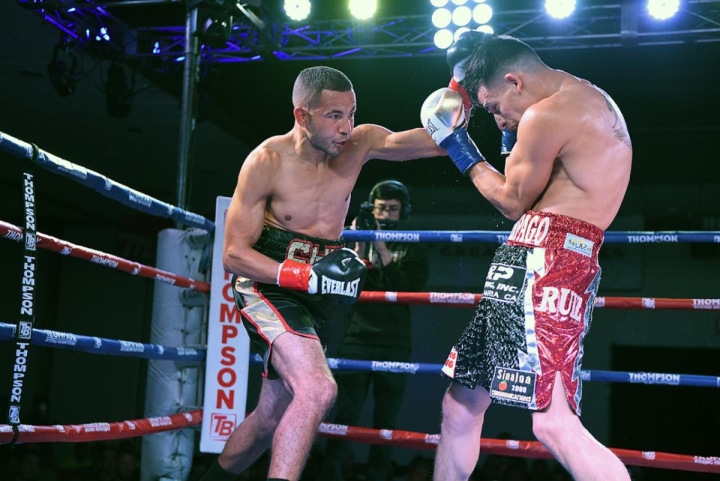 The physically-bigger Ruiz walked Flores down during the opening round, forcing the Aguadilla, Puerto Rico to fight defensively off the ropes or in the center of the ring. The 33-year-old Flores kept a tight guard and attempted to counter to the head and body of Ruiz.

Flores began to stand his ground in round two, but Ruiz continued to be the aggressor. With over a minute left in the round, Flores countered Ruiz’s one-two combination with a right hook to the head, dropping the 21-year-old to the canvas. Referee Jerry Cantu began to count, but waved the fight off at 2:02.

Ruiz, who is from Tijuana, Mexico and recently began training in the Los Angeles suburb of Maywood, drops to 16-1, 12 KOs.

In the opening bout of the Thompson Boxing Promotions card, lightweight Golden Garcia fought to a draw against Tijuana, Mexico’s Hector Garcia.

Lightweight George Acosta, who suffered his first loss of his pro career on May 10, defeated Roberto Almazan (9-13, 4 KOs) of Brownsville, Texas by unanimous decision.

All three judges scored the bout 60-54 in favor of Acosta (8-1, 1 KO), who resides in the Los Angeles suburb of Whittier.

In junior featherweight action, Ivan Zarate dropped Nery Garcia (1-9) of Monterrey, Mexico in the opening round en route to a unanimous decision victory. All three judges scored the bout 38-37 in favor of Zarate, who was making his professional debut.

Angel's a good fighter. He just fell in love with his own power and didn't respect Flores.

[QUOTE=ELPacman;20135784]lol, I just followed in your footsteps. Brutal right hook he landed. Ruiz just crumbled to the floor. Great win and upset. :boxing:[/QUOTE] Same here heh. The announcers were barely even paying attention to the fight thinking it was such…

[QUOTE=Zaryu;20135590]Had a chance to see the fight after reading the article. That was a peach of a right hook![/QUOTE] lol, I just followed in your footsteps. Brutal right hook he landed. Ruiz just crumbled to the floor. Great win and…

Had a chance to see the fight after reading the article. That was a peach of a right hook!