Irish contender Jason Quigley (17-1, 13 KOs) will make a quick return to the ring when he takes on Mexican warrior Oscar "Raton" Cortes (27-5, 14 KOs) in a 10-round super middleweight battle in the main event of Thursday Night Fights on Jan. 23 at the Hangar at the OC Fair & Event Center in Costa Mesa, Calif. The event will be streamed live on DAZN and on Facebook Watch via the Golden Boy Fight Night Page beginning at 10:00 p.m. ET/7:00 p.m. PT.

Quigley is a 28-year-old contender of Donegal, Ireland who has defeated the likes of James "The King" De La Rosa, Glen "Jersey Boy" Tapia, and Freddy "El Riel" Hernandez. The former NABF Middleweight Champion then suffered a minor setback against Tureano Johnsonin July of last year but bounced back before the year ended. Quigley has promised to stay busy and work hard in order to obtain a world title opportunity. 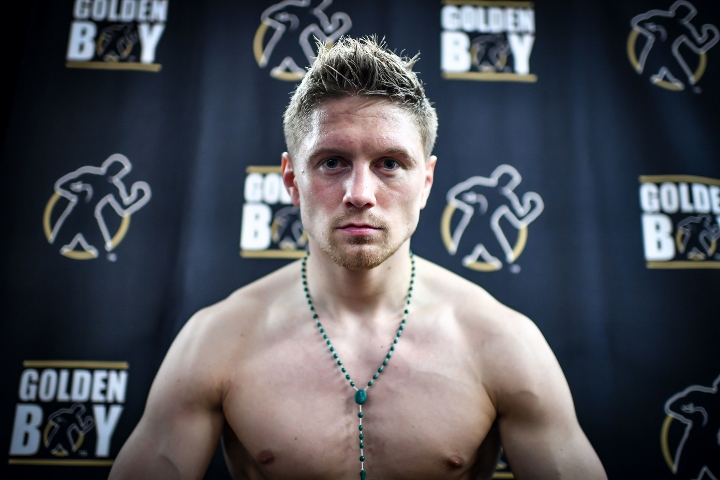 "I want to build momentum," said Jason Quigley."I fought at the start of December and got a good win. Now, I'm right back in mix. That's exactly what I want, and exactly what I need. It's all about building momentum now. I need to get in again, keep it fresh, and get out of there ASAP to keep the ball rolling. It's an exciting time. What's important now in 2020 is driving on and achieving what I want to achieve. My aim and my goal are to become a world champion. I'm excited for what's to come."

Cortes is a 26-year-old native of Zapopan, Mexico who has taken on the likes of Hugo "The Boss" Centeno Jr .and Alejandro "Zorrito" Barrera. The former holder of two youth titles will look to put a screeching halt to Quigley's momentum on January 23.

"I've been in the ring for as long as I can remember," said Oscar Cortes. "I have faced my share of tough opponents in there, and Quigley is no different. He is a big challenge for me at this point of my career, but I am ready to prove myself and my family above all that I belong with the top guys of the sport.I want to thank Golden Boy and DAZN for allowing me the opportunity to beat a top fighter on international TV."

the author of this must be an idiot, he calls quigley a "contender"!! quigley is a pretender that got exposed by johnson. what a joke!

Next opponent for Munguia