Jason Moloney: A Year That Could've Been Devastating Has Been Exact Opposite For Me

Given the circumstances, Jason Moloney knew he had to make every second count.

It’s why he accepted without hesitation a trip to Las Vegas from his native Australia for what turned out to be an audition with current promoter Top Rank to determine if he was ready for primetime, even if meant 14-day quarantines in each direction. Soon after that night, Moloney let it be known that his next fight needed to be for a major title, which comes this weekend versus unified bantamweight titlist Naoya Inoue (19-0, 16KOs).

At a time when many boxers are waiting for that first opportunity to come, Moloney is in a position to enjoy a career year.

“It’s amazing. A lot of fighters in Australia won’t fight this year,” Moloney (21-1, 18KOs) pointed out to BoxingScene.com ahead of Saturday’s clash with Inoue, live on ESPN+ from The Bubble at MGM Grand in Las Vegas. “It would’ve been devastating for [twin brother Andrew, a former 115-pound titlist] and me. We’re 29 and in the peak of our careers and it goes to waste. You have to make the most of it.

“It’s been the opposite of what most others are experiencing. We’ve been lined up with Top Rank, the best promoter in the game. This year has been the biggest year of my life. Two opportunities to headline at the MGM Grand.” 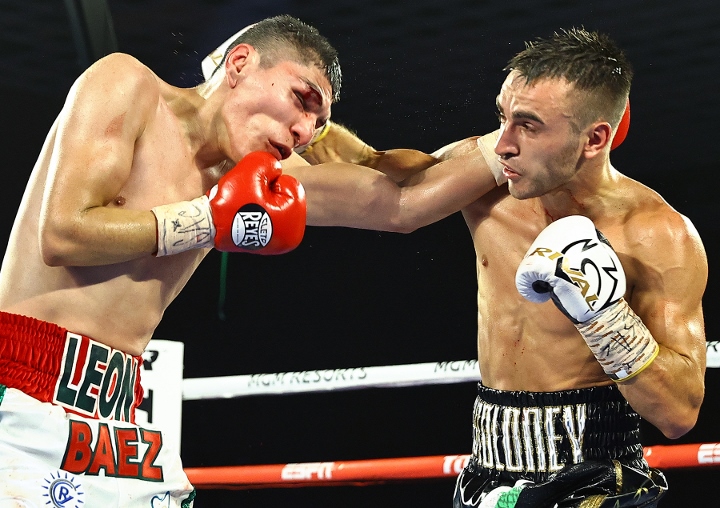 Moloney traveled to Las Vegas this past June along with Andrew, as they headlined separate ESPN shows two days apart. Andrew Moloney suffered his first career defeat and the end of his secondary title reign in a hard-fought defeat to Joshua Franco. Jason Moloney righted the family ship just two nights later, scoring a one-sided stoppage of Leonardo Baez.

The bouts made for previously scheduled opportunities in April, with Andrew due to have fought on ESPN live from Tulsa, Oklahoma, while Jason was set to face Joshua Greer Jr. eight days later in Las Vegas, on the undercard of a planned three-belt bantamweight showdown between Inoue and John Riel Casimero. Both events were scrubbed from the schedule due to the ongoing coronavirus pandemic.

Top Rank did right by the Aussie twins, presenting the Moloney takeover in Las Vegas just two months later as part of its summer series from The Bubble. They return to Sin City, first with Jason heading in as a considerable underdog against a top pound-for-pound entrant. Two weeks later, Andrew hopes to avenge his lone career defeat at the hands of Franco, on the undercard of pound-for-pound star and three-division titlist Terence Crawford in a voluntary defense versus England’s Kell Brook.

“A year that could’ve been devastating, it’s the exact opposite,” acknowledges Moloney. “I’m achieving the dreams and given the opportunities I’ve been chasing. Andrew and I have a chance to bring him three belts, what a story it would be.

“This year is something I will remember forever. It will be a great story to tell everyone. We kept working hard that everything would work out. The opportunity to put the icing on the cake and something special. In a month’s time, it’s a fairy tale.