Jason Moloney: I Asked For Inoue Fight, Now It's Time To Bring Belts Back To Australia

There was never a doubt in Jason Moloney’s mind that his next fight would come against the elite of the bantamweight division.

The only thing he did question was how soon that opportunity would materialize.

Australia’s Moloney (21-1, 18KOs) returns to Las Vegas for his second consecutive fight, this time against one of the sport’s very best in three-division and reigning unified bantamweight titlist Naoya Inoue (19-0, 16KOs). The fight came about after the division’s lone other title claimant, John Riel Casimero sealed his fate in accepting a voluntary title defense versus Duke Micah this past September on a Showtime Pay-Per-View card.

“I was confident that my next fight would be against Casimero or Inoue,” Moloney told BoxingScene.com. “Once Casimero announced that he was fighting Duke Micah, I felt really good about my chances of landing that dream fight with Inoue.

“Of course, this is boxing and nothing is official until you get that signed contract. Once Tony (Tolj, career-long manager for Moloney and his twin brother Andrew) told us that our flights were booked to head back to America, that’s when it set in that it’s really happening.” 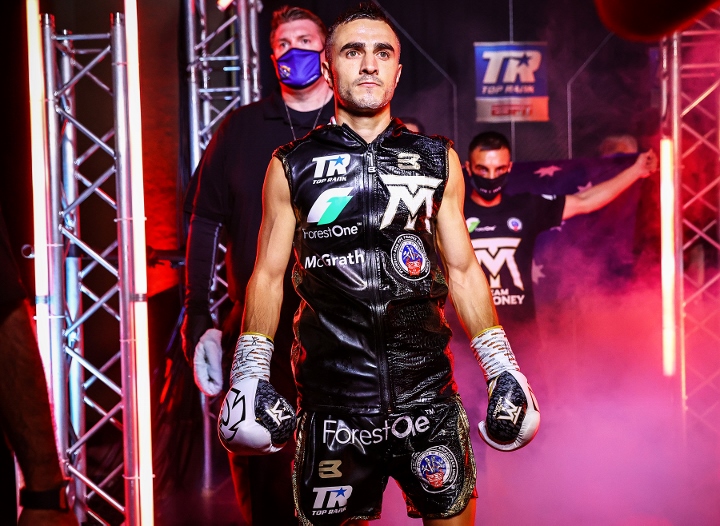 Moloney is riding a four-fight win streak—all by knockout—since his lone career loss, a narrow split-decision defeat to then-unbeaten bantamweight titlist Emmanuel Rodriguez in October 2018. The event marked his stateside debut, since claiming a win in the U.S. with a 7th round stoppage of Leonardo Baez this past June in Las Vegas.

The clash with Japan’s Inoue marks a significant leap in competition, though in fairness the same would be said of any bantamweight facing the unbeaten three-division champ and pound-for-pound entrant. Still, it’s a challenge for which Moloney has longed as far back as hearing “and still” the last time he was in a title fight.

“I was so close to becoming a world champion,” recalls Moloney. “It was heartbreaking. The amount I improved in two years—I can’t even explain it. I feel like I am ten times better from that night. I’ve worked my way back up the ranking. Once I got past Baez, I was ready for any of the champions.

“For me, it was Inoue or Casimero. That was it. If we were coming back to America, quarantining for 14 days in both directions, I didn’t want it to be for just another stay-busy fight. I asked for this fight, my team delivered and now it’s time to bring those belts back with us to Australia.”

[QUOTE=Joeboxeo;20840890]Yep is Maloney is a bigger man and he is tough. Inoue come back from a bad eye injuries, so he's career is mortgage at this stade. A lots of questions in Naoya case for me. I think Jason will…

If Jason Moloney pulls the upset this Saturday, it will be bigger than when fellow Australian Lionel Rose shocked Fighting Harada in 1968 for the lineage and two world-titles WBA-WBC bantamweight championship -- but maybe not it was a 15…

Unfortunately for him the only things he will be bringing back to Australia are a black eye and bruised ribs.

Lol this guy is gonna get bodied

Dang, this guy is about to get knocked the F out