Jarrett Hurd had a lot of difficulty dealing with Julian Williams on Saturday night.

Williams worked well when they fought inside, dropped Hurd with a left hook in the second round and utilized diversity in his game that prohibited Hurd from retaining his IBF, IBO and WBA 154-pound titles.

The former champion admitted he didn’t do nearly enough to win their 12-round championship match at EagleBank Arena in Fairfax, Virginia.

Hurd still wants to run it back as soon as possible. 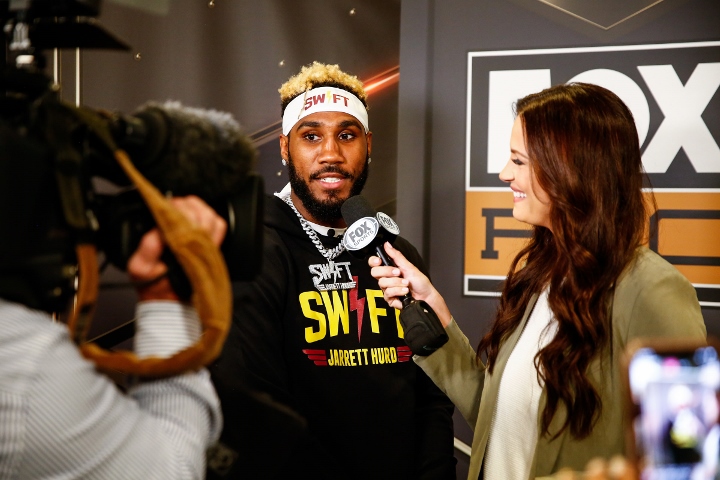 “Yeah, definitely an immediate rematch,” Hurd told Cory Lee Boxing in a post-fight interview posted on YouTube. “I’m gonna take some time off, but definitely gotta get those back. You know what I’m saying?”

The 28-year-old Hurd (23-1, 16 KOs), of nearby Accokeek, Maryland, anticipated beating Williams in his homecoming fight. Hurd figured he’d then pursue another title unification fight against the winner of the rematch between WBC champ Tony Harrison (28-2, 21 KOs) and former champ Jermell Charlo (31-1, 15 KOs) on June 23 at Mandalay Bay Events Center in Las Vegas.

“I’m just disappointed, man,” Hurd said. “The homecoming was perfect. I just wish I came out with a victory. And I’ll be back.”

The bigger, supposedly stronger Hurd acknowledged Williams surprised him with his ability to out-work him when they fought from close distances.

“We knew he was gonna be great on the inside, but he was a little better than I expected,” Hurd said. “I think I was trying too hard to land my shots, instead of just letting my hands go. But, you know, other than that, he was just a better man tonight.”

[QUOTE=kiaba360;19740272]Totally agree. He needs to work his way inside instead of just walking in face-first. Although J-Rock was winning the jab battle, Hurd looked so much worse on that front than I thought he would. Many think he's a weight…

I like Hurd but he's shipping too much punishment to the head - this guy is a prime candidate for dementia in later life as it stands based on fights to date. If he wants to rerun J-Rock or move…

And also hurd wouldn't benefit fighting outside in my opinion.he's a true brawler in the inside.i recommend he hit the weights get stronger add more power.if he had more power he would have had him outta there

He definitely needs to redeem himself.after bringing a nfl band and having the crowd behind him and his poor mother watching what a let down.smdh

Hurd is going to get hurt 😭😔