Jarrett Hurd vs. Julian Williams To Land in Washington D.C

Not since he was a prospect has Jarrett ‘Swift’ Hurd known the feeling of fighting at home.

That will finally change on May 11.

While a venue is still being finalized, Hurd’s upcoming unified title defense versus Julian ‘J-Rock’ Williams will land in the Washington D.C. area. The PBC on Fox headliner will mark his first in the DMV (D.C./Maryland/Virginia) area since his 13th pro fight, hitting the road from 2015 onward for every ring appearance since then.

“There’s so much going on here in the DMV, so to know I get to defend my world titles here is a blessing,” Hurd (23-0, 16KOs) told BoxingScene.com. “Boxing in this area hasn’t been this big in a long time. It’s such a good feeling to bring my titles home.” 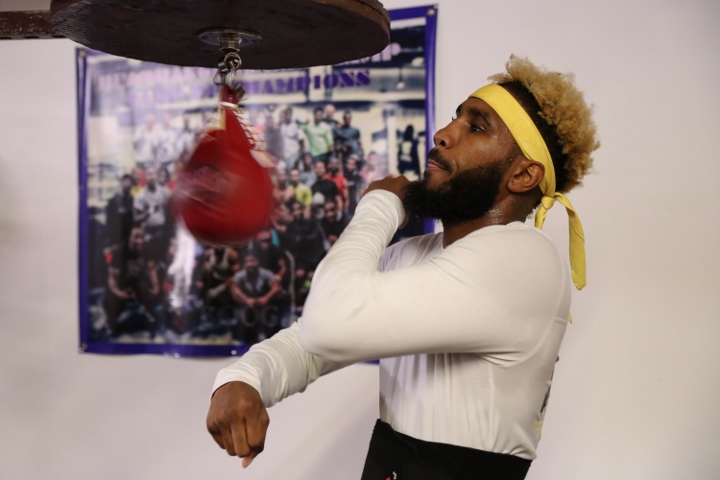 Hurd, who hails from the D.C. suburb of Acokeek, Md., fought exclusively in the greater D.C. area on the way up, with his first 13 pro bouts all taking place close to home. His last such appearance came in Nov. ’14, scoring a 1st round knockout in the nation’s capital.

It wasn’t until a year later when he was introduced to the rest of the boxing world, scoring a knockout win over Frank Galarza in their Nov. ‘15 Showtime-televised matchup of unbeaten prospects. Every one of his fights since then has been televised, all coming with the formation of adviser Al Haymon’s Premier Boxing Champions (PBC) circuit.

The closest any of them have come to being a home game took place on the Nov. ’16 televised undercard of a Spike TV show in Philadelphia, ironically the hometown of Williams (26-1-1, 16KOs) who enters his second career title fight.

Hurd won his first major title in his very next fight, rallying to knock out Tony Harrison in the 9th round of their Fox-televised vacant 154-pount title clash in Birmingham, Alabama.

Three successful defenses have followed, including a 12-round split decision win over Erislandy Lara last April which was hailed by the Boxing Writers Association of America as the 2018 Fight of the Year. He entered the fight with an injured shoulder, undergoing rotator cuff surgery before returning to the ring with a 3rd round knockout of England’s Jason Welborn last December.

Plans at the time called for a future unification bout with then-unbeaten titlist Jermell Charlo, who couldn’t quite keep up his end of the bargain as he suffered a shocking—and disputed—points loss to Harrison three weeks later. A rematch between the two is being planned for this summer, leaving Hurd with an optional defense—and now a home game.

“I’m one of (four) world champions in the DMV area,” notes Hurd of a region also boasting 130-pound titlist Gervonta Davis, long-reigning featherweight title claimant Gary Russell Jr. and 168-pound titlist Franchon Crews Dezurn. “Then you got (former two-division titlist) Lamont Peterson this weekend (versus Sergey Lipinets, live on FS1 from Oxon Hill, Md.). Fighting at home is an honor but I treat like I have for all 23 fights before this.

We’re preparing for this fight as usual, 12-round prepared. It’s easy to get caught up in fighting locally, being around people you know and can come with a lot of distractions, everyone wanting to be involved. So we’re focused on (Williams), not on the event. It might feel different once we’re closer to the fight. But right now, we’re training for Julian ‘J-Rock’ Williams, who’s coming (to D.C.) looking to take my titles and my unbeaten record.”

[QUOTE=whirlout;19607696]Its a neat little arena. More like a theater setting. I was there for Russel vs Jo Jo Diaz and will be for Peterson-Lipinets. Its usually configured for about 3000 seats but the seats are little overpriced though, casino pricing…

Another big fight for Hurd. No ***** in Hurd at all. 1 tune up and then a risky ass defense before he unifies.

[QUOTE=NC Uppercut;19603532]Oxen Hill MGM. I’ll be there live for this one. Have a comp room already to be used...plus I really like the casino and atmosphere. Also easy access for I-95. If it happens to land at the Armory I’ll…

[QUOTE=AdonisCreed;19603623]I still believe Hurd won't last much longer with his fighting style. He has to work on his defense he gets hit way too much. Especially when he moves up to 160 he's going to need to tighten up.[/QUOTE] Nice…

[QUOTE=sicko;19603170]Excellent Fight! J Rock should not be overlooked[/QUOTE] I agree but think we are in minority(don't bother me)as most just Pizz on any fighter that losses.But J Rock is a bit underestimated imo and Hurd don't quite punch like Mall…