Julian Williams outlanded Jarrett Hurd 273-249 in total punches and outlanded him in 7 of the 12 rounds. Williams threw (687) and landed (273) more punches than any other Hurd opponent (11 fights tracked by CompuBox). 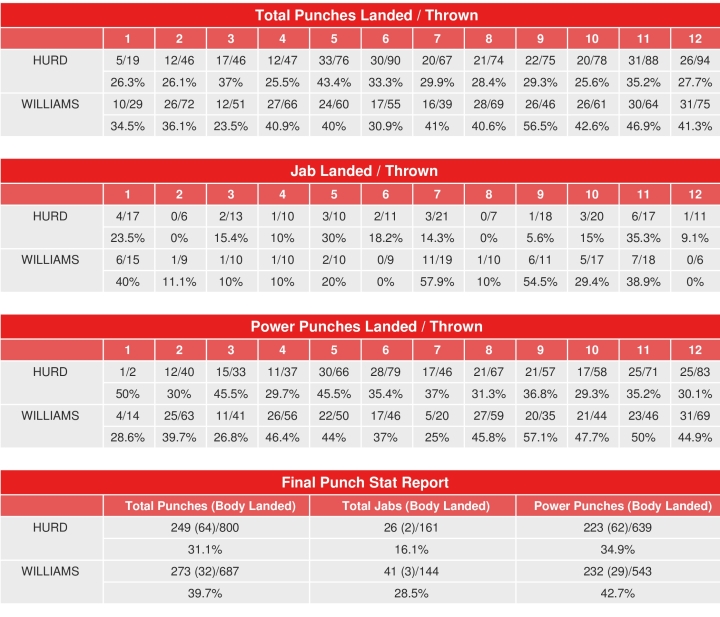 Julian Williams was crowned the WBA and IBF light-middleweight champion after an upset win over Jarrett Hurd on Saturday.

Williams, 29, was impressive in Fairfax, Virginia, a dominant performance earning him a deserved unanimous-decision win over Hurd.

Williams landed the biggest of the blows in the second round, a huge left hand with Hurd against the ropes sending his opponent to the canvas.

An all-action fight also came to life late in the eighth as Williams peppered Hurd with a couple of big shots.

It marked Williams' fifth consecutive win since his only professional defeat to Jermall Charlo in late 2016, while the loss was Hurd's first.

[QUOTE=-Kev-;19737596][B]Good fight and numbers don’t lie. T[/B]hey outlanded eachother in power punches in 6 rounds a piece, with Williams edging it with the kd and landing more jabs on top of that. Outlanding your opponent with jabs alone won’t win…

Good fight and numbers don’t lie. They outlanded eachother in power punches in 6 rounds a piece, with Williams edging it with the kd and landing more jabs on top of that. Outlanding your opponent with jabs alone won’t win…

hurd looked 20 lbs bigger then williams. looked like a kid fighting his father. there is an epidemic in boxing where one guy is a lot bigger then the other. hurd looked 180 at almost 6'2. whatever drugs are being…

That was a thorough azz whipping by J-Rock! Definitely FOTY candidate! J-Rock has the whole package! No more chin questions! J-Rock should go after that WBC Strap before fighting Hurd again! Hurd vs. Lara! Run that back! Let's Go! [B]MAN…