Jarrett Hurd Knocks Out a Game Jason Welborn in Fourth

Challenger Jason Welborn, a huge underdog, had his way with the unbeaten IBF/IBO/WBA 154-pound champion toward the end of the third round and in the beginning of the fourth round. Then, as if a switch flipped in an annoyed Hurd’s mind, he performed like the bigger, better fighter and took out Welborn with a body shot later in the fourth round Saturday night at Staples Center.

Hurd drilled Welborn with a devastating right hand to the middle of his body and sent the smaller challenger to his gloves and knees. England’s Welborn attempted to get up, but couldn’t beat referee Lou Moret’s count. 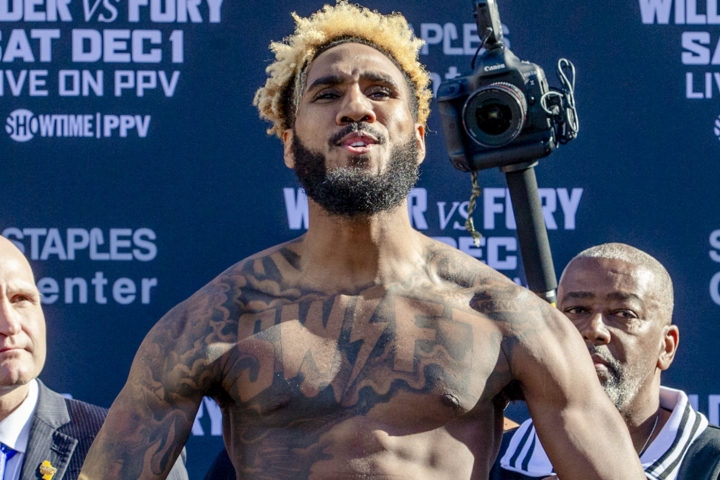 The scheduled 12-round title fight was stopped at 1:55 of the fourth round.

The 28-year-old Hurd, of Accokeek, Maryland, improved to 23-0 and recorded his 16th knockout in his first fight since undergoing shoulder surgery five months ago. The 32-year-old Welborn slipped to 24-7 (7 KOs) and lost by knockout for the fourth time since he turned pro in December 2005.

Welborn tested Hurd more in the first three-plus rounds than many might’ve expected. Hurd worked off his jab, but Welborn brought the fight to him for the most part until he got knocked out.

Late in the third round, Welborn landed a left uppercut and a left hook that left Hurd covering up. Welborn went for broke early in the fourth round, until Hurd began unloading power punches and walked down his game challenger.

Hurd fought for the first time since he had surgery to repair a torn rotator cuff in his left shoulder in June. Hurd fought through that injury when he edged Erislandy Lara by split decision in their 12-round, 154-pound title unification fight April 7 in Las Vegas.

Hurd suffered that injury during training camp for the Lara bout, but got a cortisone shot, managed the pain and went through with the biggest fight of his career.

Hurd wants to box one more time, in March or April, before facing WBC champ Jermell Charlo (31-0, 15 KOs) in another unification fight in the fall of 2019. Houston’s Charlo challenged Hurd in the ring following Hurd’s victory Saturday night.

One of them will fight Horn next

[QUOTE=HarvardBlue;19318564]The face first brawler beat a pretty good Lara and almost stopped him. Charlo is clearly the better boxer but when Hurd's constant pressure and thudding body shots starts setting in let's see how he reacts. Lara was the better…

Charlo has been calling out Turd for over a year. Turd has constantly refused to even consider it. The WBA ordered a rematch with Lara, and fans clamored for a rematch of the Fight of the Year. And Turd responded…