When a weight division is loaded, and the promotional obstacles are relatively few, just go with it.

Jr. middleweight has been fun for a couple of years. It’s packed with talent, most of it is aligned in some way with the PBC, and we’ve had quality fights along the way. A big part of the quality package is the defending champion on Saturday night (Fox, 8 PM EST).

Jarrett Hurd is one of boxing’s most exciting fighters. He has the size, range, and skill to make his own life easier at times but his mentality in the ring has been another matter. Last year, that meant a vote for 2018 Fight of the Year, Hurd’s unification victory of Erislandy Lara. Now, he comes near to home for his toughest test since the war with the Cuban last year.

Julian Williams was considered one of the bright young lights of the division heading into his first title opportunity against Jermall Charlo in 2016. A first round knockdown and fifth round stoppage halted his title dreams that night but he’s rebounded with four straight wins and a second chance, this time with two major titles on the line.

There are still some promotional fingers crossed that 154 lbs. can get to a Hurd-Jermell Charlo unification showdown later this year. Can Williams end the discussion before Charlo even has a chance to regain his WBC belt from Tony Harrison in June? 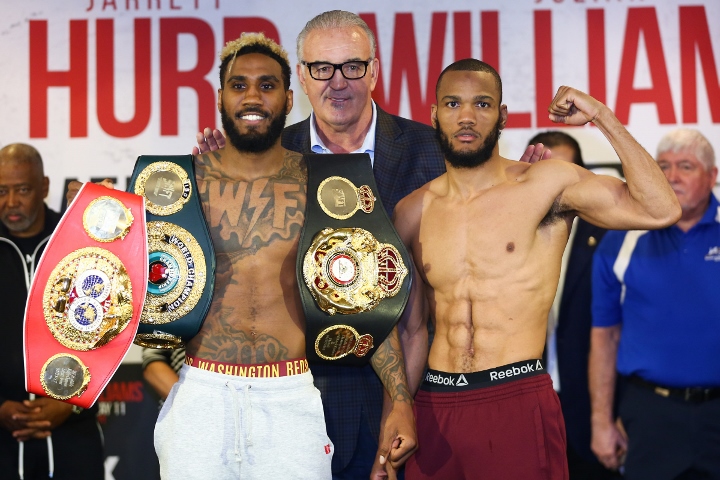 The Case for Hurd: Seeing Hurd in person makes his ability to make 154 lbs., day before weigh in or not, all the more impressive. That he can boil down and maintain the engine to fuel an extended, high volume attack in fight after fight is as well. Hurd comes forward with a nasty body attack and violent uppercut, weapons that keep him dangerous all night while exhausting foes physically and mentally. The latter is in part a result of Hurd thus far showing a tremendous chin. He’s needed it because if there is a weakness in Hurd’s game it is that he is there to be hit.

The Case for Williams: Williams can draw on two tapes in preparation for this fight: the rounds where he stayed off the deck against Charlo and Tony Harrison’s performance against Hurd prior to the Hurd catching up to him. After being dropped hard in the first round, Williams got up against Charlo to make a hell of a fight, countering well and tying up in close quarters. Harrison had moments against Hurd by using his aggression against him, landing in combination, and stepping around him. Hurd sometimes has to stop and reset after being tagged hard. If Williams doesn’t get greedy on offense early, and lets the openings develop organically, he can find his way to a lead on the cards halfway through the fight. If he’s contained the incoming well up to then, he has a serious chance to win a decision.

This is a really nice fight and, as was the case before Harrison’s big upset of Charlo, a lot of people don’t seem to see this as close as they probably should. Williams may have a slight edge in hand speed and is the more defensively responsible fighter. The big question is probably what happens when Williams gets tagged. If his chin is up to it, Williams has the countering ability, head movement, and patience to use Hurd against himself. The guess here is the chin holds up and the pick is Williams in an entertaining upset.